Every year I'm in charge of supplying desserts for our Thanksgiving Day meal and this year, similar to last year, I also hosted afternoon dessert for extended family the next day. So that was 2 occasions to plan and bake for. But I felt woefully unprepared for this year's baking-fest.  I'm not sure why.  It wasn't like I didn't know Thanksgiving was the 4th Thursday of November and that I couldn't read the calendar as each day passed.  But like a deer frozen in the headlights, I played chicken with time.  And lost.

Which is why I needed to take off the 2 days before Thanksgiving and scramble to plan what I was going to bake, head to Costco and Trader Joe's to buy any missing ingredients and get baking. Last Tuesday was grocery shopping and prep work.  (Wednesday and Thursday was for actual baking.) Fortunately, one of the advantages of being a baking ingredient hoarder is I'm usually well stocked up on the essentials and only had to pick up a few perishable items to make my supply complete. 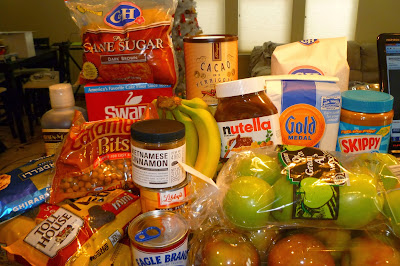 Thanksgiving Day desserts:
My traditional Pumpkin Upside Down Cake with Cranberries and Caramelized Pecans - this is what we have in lieu of pumpkin pie.  As I've mentioned before, I don't like pumpkin pie and since I'm the one making desserts, yeah, we don't have pumpkin pie. The original recipe for this cake makes a trifle too much caramel so I usually only make 3/4 of the caramel recipe for 1 cake. It doesn't make it as gooey or rich but that's not always a bad thing.  I don't usually like cranberries but they're perfect in this cake to add some tartness and contrast with the sweetness of the caramel.
My niece asked for Banana Butterscotch Caramel Cupcakes which is also one of my favorite cupcakes.  I'd been saving up overripe bananas in my freezer so this was a perfect use for them.  All went well when I got up early to make them on Wednesday: I had a lot of baking and cookie dough making to do so I made up the batter in record time and whisked them into the oven....only to realize 5 minutes later that I had forgotten to add the butterscotch chips to the batter.  Eep.  I yanked them out of the oven and sprinkled some on top of each cupcake but I knew that wasn't going to cut it.  They needed to be mixed into the batter itself  to add that butterscotch flavor to the banana.  After they had baked, the few butterscotch chips I had managed to sprinkle on top had partially sunk into each cupcake and also somewhat melted.
But I had no intention of accepting a cupcake fail so I cored the middle of each cupcake, warmed up some salted caramel, added more butterscotch chips to it and spooned that in for the filling.  It wasn't perfect but at least I was able to incorporate a little more butterscotch flavor into them.
Top off with the brown sugar frosting and it looks like I had made the cupcakes this way on purpose.
Those were the two desserts I made the day before Thanksgiving and on Thanksgiving Day itself, as soon as the turkey came out of the oven and we sat down to eat, I placed the third dessert in to bake, another family favorite: apple cobbler. The original recipe calls them Apple Crumble Bars but I make it more as a cobbler and serve it warm with ice cream.  Whatever you want to call it, it's good. I only took a picture with my ipad so the quality isn't very good and I forgot to take a better one with my camera. But regardless of how it looks, did I mention it was good? Especially served warm with vanilla ice cream which is how I served it to everyone along with a slice of the pumpkin upside down cake.
Considering the non-dessert Thanksgiving spread, it turned out to be more than enough dessert for the 10 of us on Thanksgiving Day. But of course that didn't stop me from making more sweets for 15 people the following day.  Since 3 of the 15 were kids, I went for the simple rather than the fancy and for once, stuck to recipes I'd made before (click on the caption titles in each picture to go to the recipes).
Once everyone had arrived or was on their way, I also made the Cinnamon Sugar Banana Lumpia to be served warm at the last minute.
And just to make sure no one was shortchanged of sugar, I also served the Red Velvet Cheesecake my cousin brought for Thanksgiving.  I'm not a cheesecake person but it was layers of red velvet cake sandwiched with vanilla cheesecake layers and the sliver of the red velvet cake part of it that I tried was pretty good.
All in all, when I'm fortunate enough to enjoy good food with family, there's much to be thankful for indeed. And after all that eating, I was also grateful to get to the gym and run 5 miles this morning.  That was probably enough to work off at least 2 cookies. We'll just conveniently ignore everything else I ate beyond those 2 cookies.  Thanksgiving comes only once a year after all.
Posted by Pastry Chef Baking at Saturday, November 30, 2013