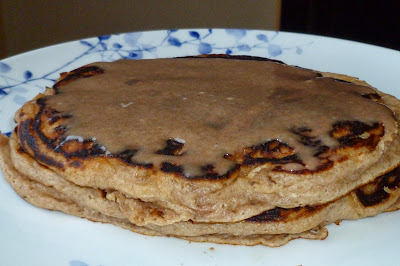 I had a 6:30 am meeting last week that I took from home since there was no way I was going to be awake, showered, dressed and coherent at the office by then.  Fortunately, it was an all-hands meeting so I could be logged on from my laptop in my kitchen with the phone on speaker and I could listen to the meeting and still multi-task, namely make myself breakfast. I don't normally eat that early since I usually work out first thing in the morning and eat only when I get to the office.  In hindsight, technically I suppose I could've been on my treadmill getting a workout in while I listened to the all-hands but I tend to zone out when I'm exercising so that probably wouldn't have been a good idea. 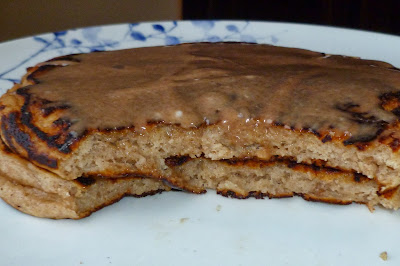 Instead, I made pancakes. I think I could bake or prepare sweet treats like pancakes in my sleep so this was a safe multi-tasking effort.  Especially pancakes which are so easy to put together.  Dump the dry ingredients in one bowl, the wet ingredients in the other, whisk together while the frying pan is heating and fry.  Initially I was going to skip the cinnamon vanilla glaze and use syrup instead but since the pancakes took such little time and effort to make, I decided to go ahead with the glaze. It turned out to be a good thing that I did because the glaze was the best part....says the person who normally doesn't like frosting and this was essentially like a frosting but thinner and better. I only used 1/4 cup milk to make fluffier pancakes like the recipe suggested but the pancakes didn't come out as fluffy as others I've made.  It also isn't sweet at all which is good because the glaze provides the needed sweetness and flavor and I think having sweet pancakes would've been too much with the glaze.  On the other hand, with so much sour cream in them, they actually turned out a little bitter and I think they could've used a little more sweetness.  I'd suggest keeping the glaze recipe and making something like the Orange Cinnamon Roll pancakes and subbing out the orange glaze in that recipe for the cinnamon glaze in this recipe for that snickerdoodle slant. Which is what I did the next day to use up the leftover glaze (pics below). 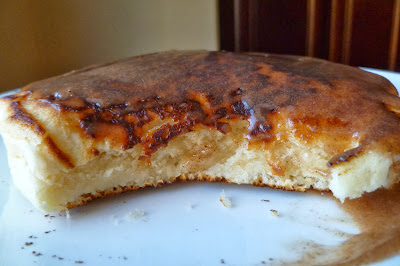