Lemon Chicken Pasta - made October 26, 2013, recipe adapted from The Mother Huddle
My lemon tree is exploding with lemons.  In hindsight, I should've probably thinned out some of the blossoms earlier but it was just so thrilling to see real, actual lemons growing on a tree I've had for almost 3 years and had hitherto only produced 2 or 3 lemons than I just let them be. You can't have too many lemons, right?  Uh, we'll see.  Some of the branches are so loaded now that they're almost touching the ground.  And I can't pick most of them yet since they're still green.  I have been giving one particular lemon the hairy eyeball though as it's been pretty yellow for the past few weeks. It still seemed rather hard though so I left it alone - not hard to do since I only go out to the backyard when I guiltily remember I haven't watered the lemon tree or the orange tree.  A green thumb, I possess not.
But I did finally snip the first large yellow lemon off my tree this past weekend and put it to good use with this lemon chicken recipe I found on pinterest.  I used chicken breast tenderloins instead of chicken thighs since that's what I bought from Costco and also subbed out green onions for the onions in the original recipe since that's what I had.  I also had some parmigiano reggiano cheese so I grated a bit of that and threw that in as well.  I'm reminded why real cooks enjoy cooking.  There's something satisfying about using up a bunch of random ingredients from the fridge and making something edible out of it.

This recipe made enough sauce that I actually paired it with some whole wheat noodles and baked it off as a casserole to make lemon chicken pasta.  I liked how easy it was to make although if you want more lemon flavor, I'd increase the amount of lemon juice to at least 1/3 to 1/2 cup.  This wasn't super lemony so it might also be good to place sliced lemons on top of the chicken before baking. 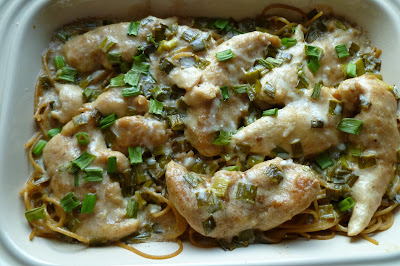