Coconut Battered Shrimp - made October31, 2013 from Ditch the Wheat 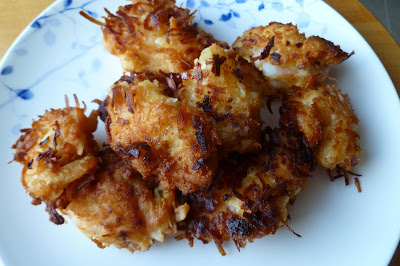 Back when I was eating the Whole 30 way, I found a plethora of recipes using coconut.  I'm more used to baking with coconut but since you're not supposed to consume sugar, dairy or grains on Whole 30, my usual options weren't - well - an option.  However, this coconut shrimp recipe was. 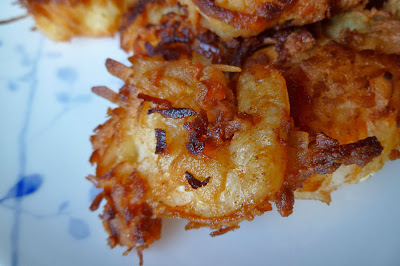 I had a canister of coconut flour in my pantry that I had bought some weeks ago because, at the time, I was planning on making a dessert recipe that called for it.  I never got around to making that particular recipe but it was handy for making this one. I had never cooked or baked with coconut flour before so I wasn't sure what to expect.  But I found out soon enough.  It turns out coconut flour makes a thick batter.  And that it doesn't adhere very easily to shrimp.  I had the devil of a time getting it to stay on the shrimp long enough for me to roll it in coconut and drop it into the hot coconut oil. 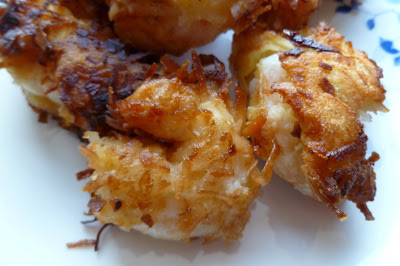 Several key learnings: coconut itself browns very quickly so you don't want to leave it in the oil for too long or it'll burn.  Fortunately shrimp cooks quickly so undercooking it isn't a big risk.  By the time your coconut turns golden brown, the shrimp should be cooked as well.  I also discovered that you can't have coconut oil at too high of a temperature or it'll burn all on its own.  At first I thought it was the coconut itself burning then when my oil got dark too soon, I realized I had the burner on too high.  Lastly, I learned neither coconut flour nor coconut oil is easy to work with unless you know what you're doing. Which I didn't before and I hope I do now.  Mine didn't come anywhere as nice looking as the one from Ditch the Wheat but I thought it was still pretty tasty.  It's really hard for me to mess up shrimp to the point I wouldn't like it though. 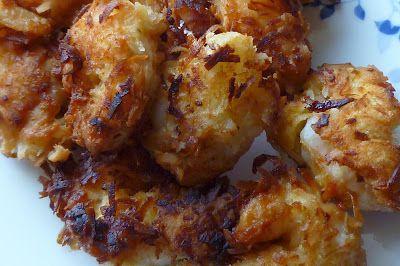