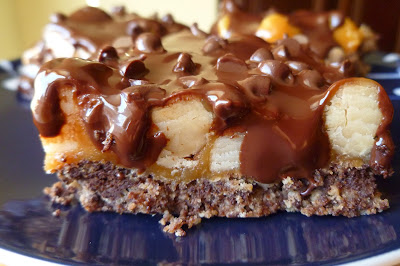 Um, can we say "fail" on this one?  I've had this recipe for awhile and kept wanting to make it but putting it off because I always forgot to buy hazelnuts which is what the original recipe called for. I finally got tired of procrastinating and substituted macadamia nuts for the hazelnuts so I could go ahead with it.

The crust was easy enough although it never really formed a dough but remained dry crumbles, like a shortbread crust for my usual lemon bar recipe.  Undaunted, I patted it into a tart layer anyway and went with it. Then I got started on the topping and that's pretty much where the baking gods decided to forsake me and throw me into the failure pile.  For one thing, the directions were a bit sparse in terms of how long to cook the topping to get to "golden".  For another, when your topping ingredients are all pretty pale in color to start with (butter, granulated sugar, LIGHT corn syrup and condensed milk), yeah, golden is subjective. 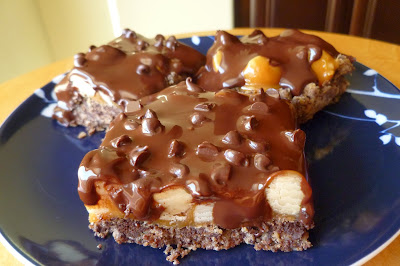 So you can imagine what happened next.  I'm cooking it over the stove top, whisking away, waiting for that perfect golden moment.  It never happened.  Or if it did, it shot straight from "golden" to "butter separating out, haha, nothing you can do about it" in the blink of an eye.  Butter separating out in a mixture like this means I had the heat too high and I cooked the mixture for too long.  It can usually be fixed by lowering the heat, adding a little cream and whisking to emulsify the butter back into the mixture.  Except I didn't have any cream at the time and adding milk didn't work because by then, I think the butter had decided it was all or nothing in heading for the failure pile and gave me the finger. 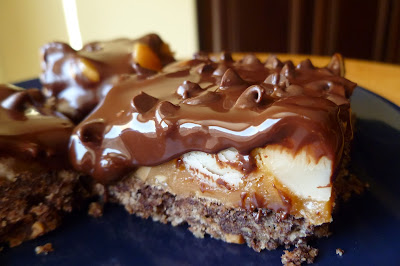 Plan B: throw away the topping failure, melt an 11-ounce bag of caramel bits with a little milk, add the macadamia nuts, pour over the tart crust and forge ahead.  Which is what I did.  So I was able to salvage this so it wasn't a total lost cause but it's not going onto my Baking Hall of Fame wall either. The crust wasn't sweet enough to eat on its own and ironically, paired well with the caramel layer because of it. The dark chocolate topping was also a good complement to the caramel.  So taken all together, this was a decent cookie, especially if you don't have much of a sweet tooth and prefer dark chocolate over sugar.  I don't so it's not something I'd make again....even if I could make the original topping properly. 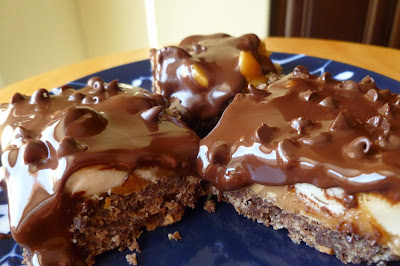