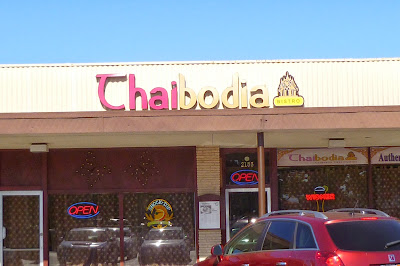 Another new Thai restaurant to try with one of my coworkers.  In case you wonder as I go to these different restaurants for lunch with a coworker or two, it's not always with the same person.  I think I rotate through 3-5 coworkers to go out.  We usually end up talking about work so it's like a (more fun) meeting but with food.
With a name like Thaibodia, I expected the cuisine would be a fusion of Thai and Cambodian food but a perusal of the menu leads me to believe it's mostly just Thai food. It starts off with a clear soup and I really liked the broth, not too spicy but very flavorful.  They also served us a side salad as part of the lunch special but they had already added dressing to it so I left mine untouched.  I'll eat salad greens but don't like dressing.
For once I didn't order the pad thai although that was my first inclination. Instead I got the pad see ew with chicken.  Pad See Ew is made with wide rice noodles served in a soy-based sauce.  Thaibodia's also came with carrots and broccoli.  I don't mind carrots but I don't like broccoli so I requested that they exclude it.  As you can see from the picture, they got it wrong since my dish had broccoli but nary a carrot in sight.  No big deal, I just fished out the broccoli and set them on my unused salad plate.  When the waiter came to clear the salad plates, he remarked "oh, you don't like broccoli?" "Um, no, that's why I ordered it without broccoli." He apologized for the mistake but I waved it aside - again, not a big deal.  Although I did think it was funny because the waitress who took my order even repeated "no broccoli" to me when confirming my order.  Clearly something went wrong between her order pad and the kitchen.  Fortunately, broccoli is easy to pick out and set aside. The pad see ew was good but the only thing I didn't like about it is they had chunks of garlic strewn throughout.  I don't mind garlic for the flavor but would prefer not having big pieces of it in my noodles.  Next time I'm trying the pad thai instead.
My coworker got the rice plate special with eggplant and we ordered the roti appetizer.  Although it was an appetizer, the roti actually came out last after we had already started on our entrees.  They give you a little more than at Banana Leaf but it wasn't flaky like Banana Leaf's and was more dense and chewy. I liked it and thought it was good but have to admit that Banana Leaf's roti was better because it was flaky and not as greasy.
Overall, Thaibodia is an okay place for lunch.  The portions are fairly generous - I ate only half of my pad see ew and took the rest home for dinner - and the prices are reasonable with most lunch specials at $10 or less.  They were really busy for a Friday and the poor waiters seemed rushed off their feet but I had no complaints about the service or wait time.