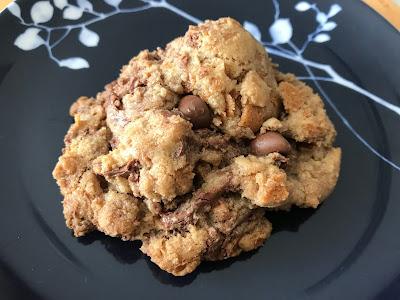 This is the second of three chocolate chip cookie recipes I tried at once. Or at least I made the doughs on the same day. I was working from home a few Saturdays ago and while I was waiting to hear back from my various coworkers, I whiled away the time making cookie dough. Since I couldn't leave home as I had to collaborate back and forth with some work that had a Sunday night deadline, I might as well be productive, right? 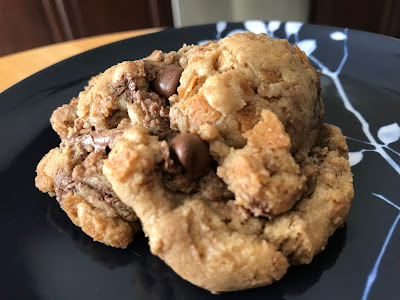 I don't often try out recipes from my mystery books yet I read culinary mysteries partly for that reason. I've read the Hannah Swensen mysteries by Joanne Fluke almost from the beginning but have given up in recent years when her "love triangle" never resolved itself until she made it a square. After all that emotional investment into the characters (will it be Mike? But how about Norman? What, who's this other guy?), I couldn't continue the journey any longer. But I digress. 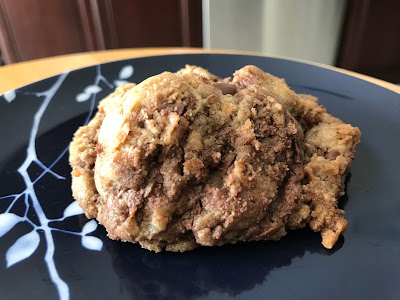 Whether you like the mysteries or not, a new chocolate chip cookie recipe in the first one almost begs to be tried. Although I've actually had this book for years and only just now tried this recipe. Mostly because it called for the use of cornflakes and I've never jumped on the cornflakes-in-cookies craze. But since I've discovered feuilletine, I decided it would make a great substitute for the cornflakes. 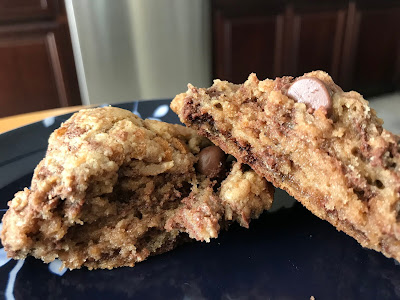 I thought they would remain airy-crispy in the cookie but alas, no. Actually it was hard to get any texture from them at all once they were mixed into the dough. I think the liquid of the brown butter did them in and instead they contributed a texture similar to what I would have gotten had I added oatmeal to the dough. More of a chewiness rather than a crispiness. Bummer. 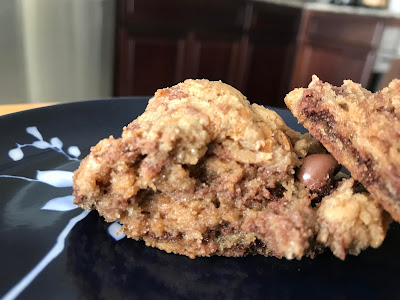 However, all was not lost since, as with all recipes involving browned butter, the nice thing about using it, besides the flavor it contributes to the cookie, is, if you time it right and mix the dough while the brown butter has cooled enough not to cook the eggs when you stir them in but is still warm enough that when you add the chocolate chips at the end, the chips partially melt into the dough itself. Some remain intact but others melt into the dough, imparting a richness of flavor and texture that's a notch above your average chocolate chip cookie. This might still be crunchy if you stick to cornflakes but overall the flavor was pretty good. And they didn't spread very much, always a positive in my (mystery) book. 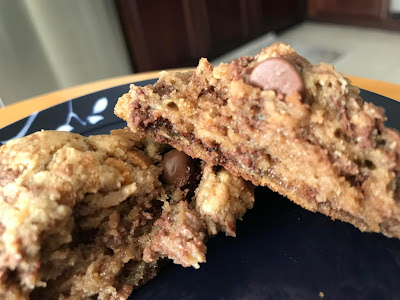 Posted by Pastry Chef Baking at Sunday, August 26, 2018 No comments: 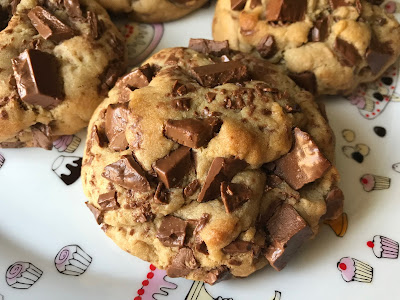 This is the first of several chocolate chip cookie recipes I've recently tried and this one is amazing. This recipe only makes six good-sized cookies but what a six they are. It has all the hallmarks of what I adore lust obsess over really, really like in a chocolate chip cookie. 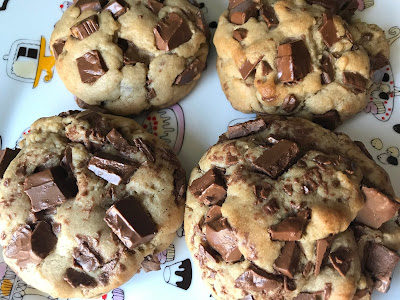 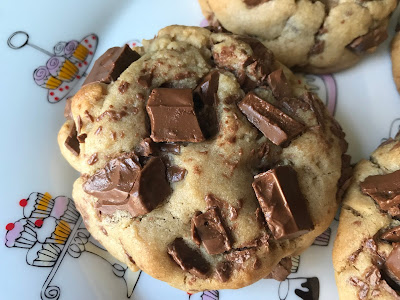 It almost goes without saying that it was chubby and didn't spread much. The brown sugar caramel overtones are there. But what really made it for me was the soft, chewy texture, not cake-like but just what a thick, fat cookie should be. It doesn't quite have the crisp outside of a Levain Bakery cookie but it's the perfect texture on the inside of a chewy cookie you can really sink your teeth into. 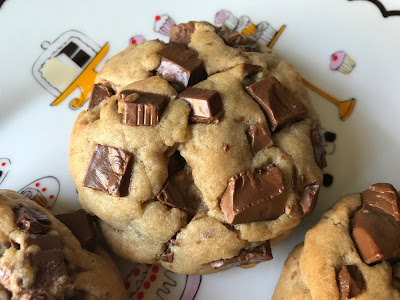 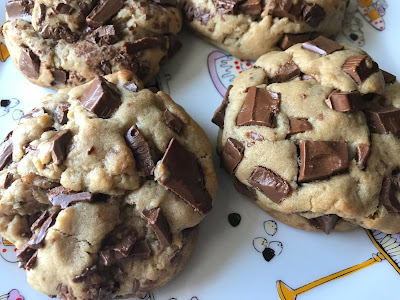 I did all the usual tricks I do to maximize perfection of cookies in general, chocolate chip cookies in particular: portion the dough into good-sized dough balls then pat into thick discs. These don't spread much and if you want cookies of uniform thickness, go the route of the thick disc. Put in a freezer bag and freeze at least several hours. 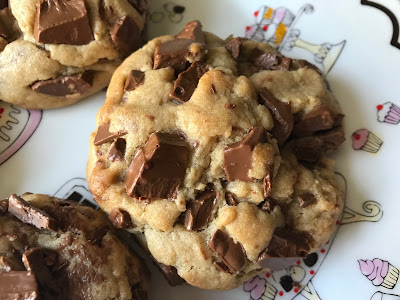 If you read nothing else of this post, follow this part: do not overbake. I like to bake cookies just until the edges are brown and the middles are just barely past the raw stage. You can tell they're not raw anymore as the middles won't be shiny and there may be a few thin fissures or hairline cracks on top. Do not wait until all of the middles are brown or else they'll be overbaked. 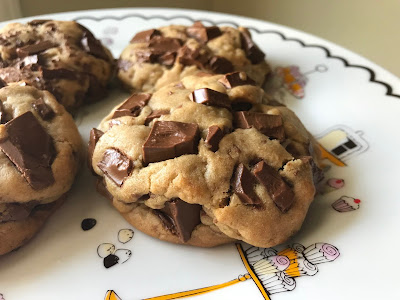 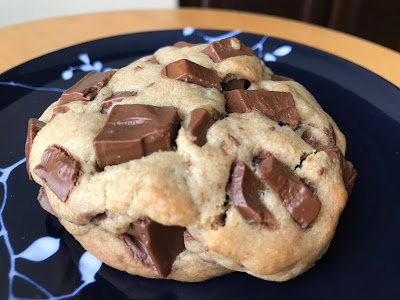 For maximum enjoyment of this cookie, you have to wait until they're completely cool and at room temperature. I know, you just rolled your eyes. What happened to "10 minutes out of the oven"? Well, for cookies this thick and for the chewy texture I was rhapsodizing about, these are best at room temperature or, if your willpower doesn't stretch that far, wait until they're just barely lukewarm. The chips will still be melty but the cookie should be set just enough to be chewy but not mushy. If you eat while they're still too hot or warm, you'll get cookie mush. Trust me, the wait is worth it. 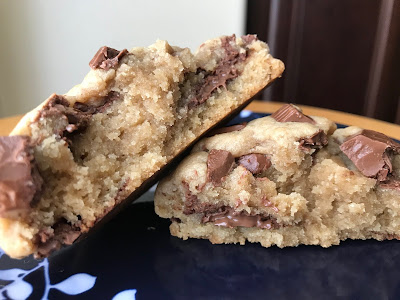 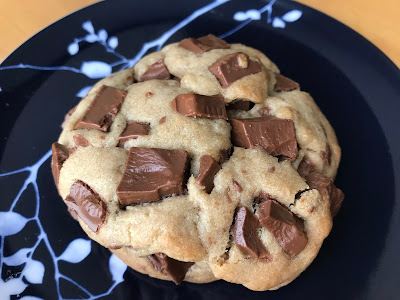 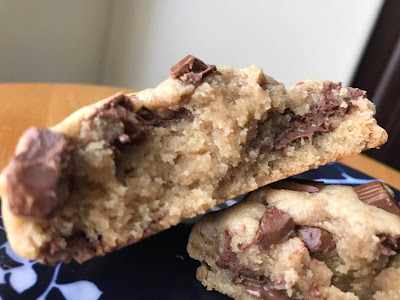 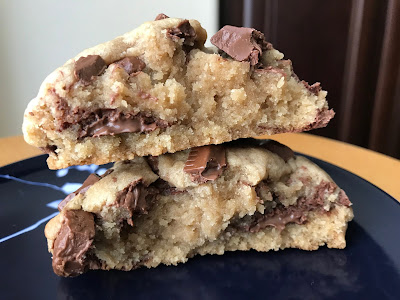 Posted by Pastry Chef Baking at Sunday, August 19, 2018 No comments: 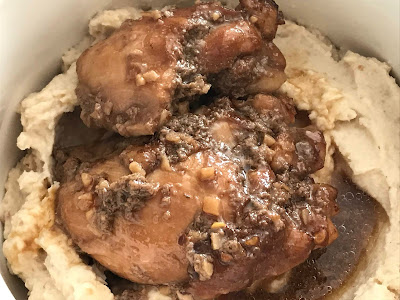 I received an Instant Pot for my birthday. I'd wanted one off and on for a bit but not seriously since you know...me and cooking. I had a large crock pot once and have posted some recipes I've made from it but I wasn't interested in cooking enough to use it very much so I gave it to my niece and got a small one. Which I don't use that often. 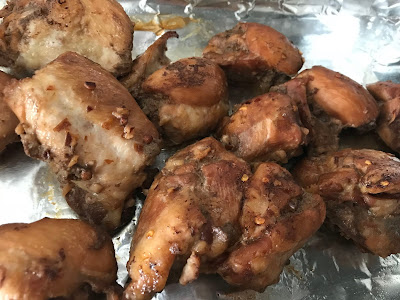 But as with any new toy, I'm all-in with good intentions to use it, cook for myself, be all grown up, blah blah. Plus I liked the concept of the instant pot being the updated version of a pressure cooker, just prettier and digital. Shorter cooking time than a crock pot and promises of tender protein in mere minutes. Works for me. 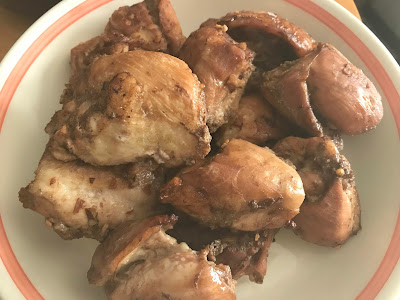 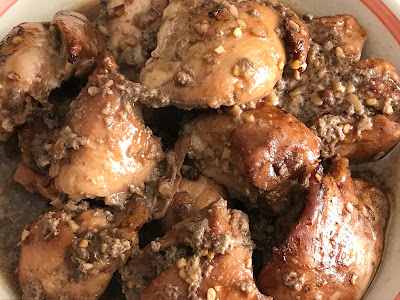 My maiden voyage with the Instant Pot is this Chicken Adobo recipe I found on pinterest. Honestly, it couldn't be easier and for a non-cook like me, that says something. You just combine the ingredients in a bowl or ziploc bag, let the chicken marinate for 30 minutes or more (more is always better when it comes to marinating. Or so I've been told), then put everything in the Instant Pot for 8 minutes and go away. There's an extra step of broiling the chicken to brown it at the end and letting the sauce mixture boil to thicken a bit but even that's pretty easy. 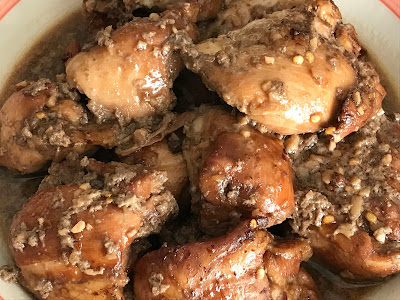 I have to say, this was pretty delicious. My mom makes adobo often and she makes it really well. This is almost as good as my mom's with far less effort. And in an effort to be somewhat healthy, I ate this with mashed cauliflower instead of rice. Go me. 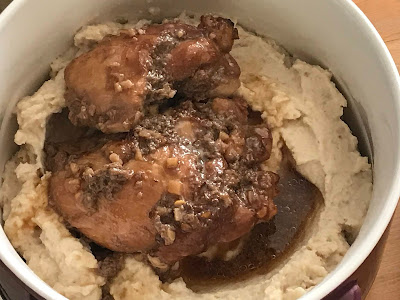 Posted by Pastry Chef Baking at Saturday, August 11, 2018 No comments: 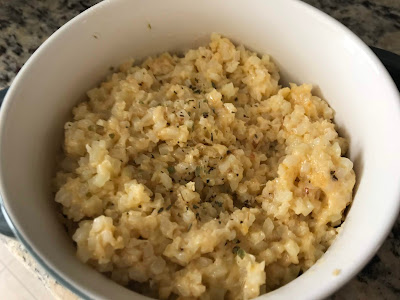 I made up this recipe. I don't normally since I'm an uninspired cook but I was looking through so many recipes on pinterest for cauliflower risotto that all looked so similar but I was inevitably missing one ingredient or the other from each one. So I decided to just make do with what I had. Measurements are not exact since I don't remember them exactly and didn't write them down. Now I understand the freedom real cooks have when they just "throw something together". 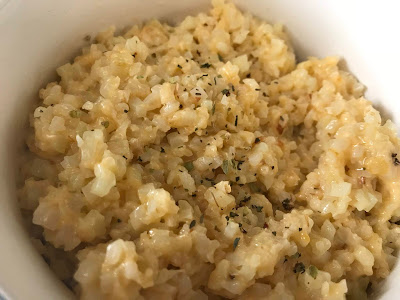 Oh wait, no, you're not reading the wrong blog. I ate a vegetable. Not my version of "vegetable" which generously includes corn and potatoes - and French fries when I'm in a mood - but an honest to goodness vegetable that has nutrients instead of starch and empty calories. It's really me *waves*. I bought one of those boxes of riced cauliflower from Costco in a fit of nutritional virtue and needed to do something with them. Unlike the last time I bought a pack from Trader Joe's then hung onto it until it went bad. Oops. 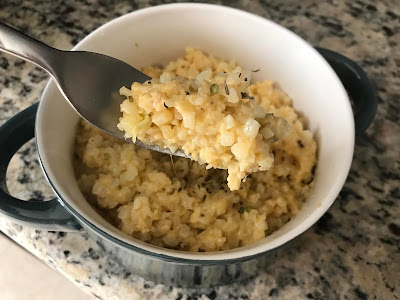 I've never been a fan of cauliflower. Never liked the smell when it was cooking. But the riced version looks so un-cauliflower-like and I've been trying to low carb so I thought I'd give it a shot. Surprisingly, this turned out okay. I know, that doesn't sound like much of an endorsement but, hello, me and vegetables. If I can eat it, it's already miles ahead of other vegetables. Although I'm not going to lie, the cheeses helped. A lot. The key to this one is to cook the riced cauliflower enough to really soften it. It doesn't have much flavor in and of itself and I'm not gonna lie, that helped me eat it. I added some hamburger for protein and presto, low-carb dinner. 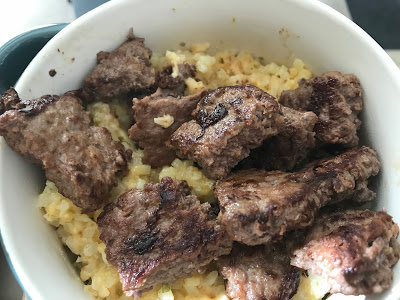 Posted by Pastry Chef Baking at Saturday, August 04, 2018 No comments: