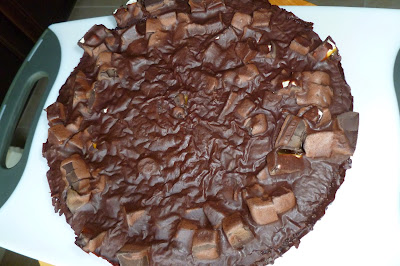 I'm renaming this pie to make it a little more descriptive.  The pictures don't look as good as if I had taken them when the frosting wasn't set and still glossy.  But when it sets, the chocolate appears dull.  Fortunately, that didn't affect the taste.  With its original elements of chocolate, marshmallows and more chocolate, this defines Mississippi Mud the way it should be.  As is my new habit, I swapped out the marshmallows called for in the original recipe with Midnight Milky Ways from my Halloween candy stash. I was dealing with a bunch of coughing and sneezing on Halloween so I ended up NOT passing any candy out that night (parents can thank me for not sneezing on their little costumed darlings).  Which meant I was left with the bags I had bought beforehand, unopened and with absolutely no interest on my part in consuming them.  Except in baked books.

This was called a "pie" so I baked it in a 9-inch round springform as it called for but I think it would've been better either in an actual pie pan for that pie authenticity or even in an 8-inch square baking pan to easier cutting and portioning to give away.  Because you know I only bake to give away. Whichever pan you bake it in, you're probably going to want to cut this into small pieces.  I thought the brownie part was really good, moist and fudgy.  I'm less enamoured of the Midnight Milky Ways; while they're a better substitute for me than pure marshmallows because I don't like marshmallows, I didn't like them in this as much as I did in the Mississippi Mud Brownies I made previously.  And I think that's because I didn't like the frosting on this one - it was too sweet for me and somewhat gritty.  I think it would've been better with a cooked frosting or at least something hot enough to melt the powdered sugar and make a smoother frosting.  As it was, the topping made this a little too rich for my blood.  If I did it over again, I would keep the brownie base, top it with chunks of Milky Way Caramels and drizzle it with a little chocolate frosting but not blanket it completely. Sometimes less is more. 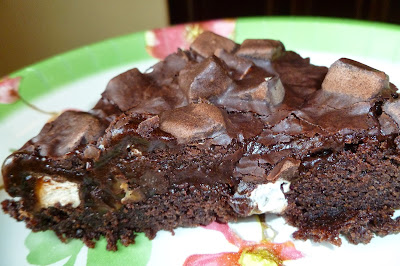