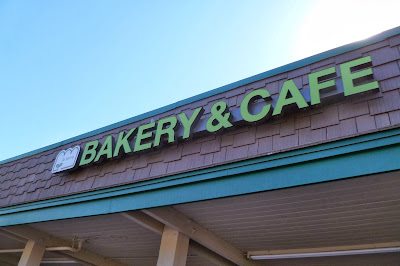 la Terra Bakery is in the same little strip mall as Gochi Japanese Fusion Tapas so I discovered it when I went to Gochi for the first time.  Anything that says "bakery" demands my immediate attention and investigation. So I popped in to take a look and see what I could get for dessert after lunch. The inside can be considered spacious or sparse, depending on your interpretation. Upon chatting with the lady behind the counter, we discovered they had only been open a little more than a month from the time of our first visit back in early October. 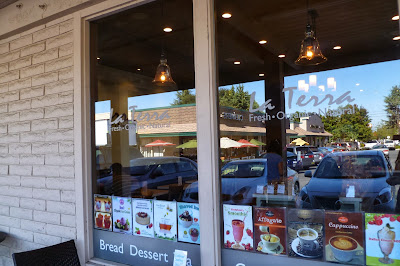 While it has some of the same elements as a typical Asian bakery in its filled breads, individual packaging and baked wares spread out on trays on a table, it's also got a few differences.  The price points are a little higher and some of the flavors and offerings were more inline with an American bakery.  There was a nice lady behind the counter who offered us samples from a covered tray and explained what the different products were, including that they made most of the products from organic and natural ingredients.  Some of their offerings were also gluten-free. 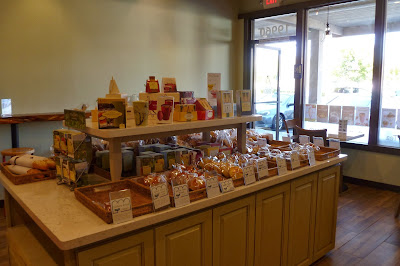 By the counter was a refrigerated glass case of their more fancy, individual desserts as well as small, whole cakes.  The packaging on the individual desserts was reminiscent of a fancy French bakery which I thought added a touch of class.  Individual cake slices were prettily decorated, on a silvery foil liner and - a stroke of genius - carefully covered with a stiff plastic wraparound to protect the cut slices from drying out. You don't see that kind of care in packaging in most bakeries and, as abhorrent as dry cakes are to me, is much appreciated. 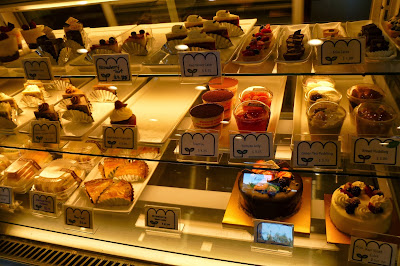 I bought a slice of red velvet cake to have for later and was pleased with the care they took in packaging it up for me to take. But - unfortunately - the packaging was the best part of the cake. I tried to like it because I wanted to write a rave review about the bakery and give them some positive exposure, especially since they're so new. But in all honesty, I couldn't based on the red velvet cake alone.  It didn't really taste like anything.  The cream cheese frosting overwhelmed the more subtle (very subtle) chocolate of the cake so it seemed like I was eating more of a red-dyed cake than a chocolate red velvet cake. 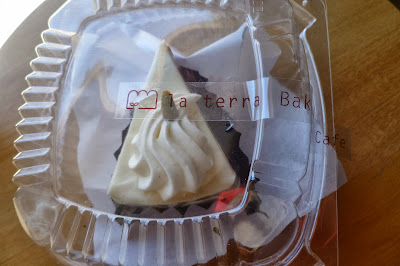 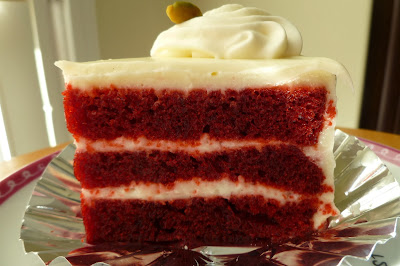 Which is one reason why I had put off writing this blog post - I wanted something more positive to say and I didn't want a negative review to be based on only one of their products.  So there was nothing left to do but return to la Terra Bakery the next time I met a friend for lunch at Gochi and try out a couple of other products.
I sampled the sweet potato bread (not pictured) from the sampling section by the cashier.  I liked the texture of the bread (similar to Hawaiian King sweet rolls) but, just like my sweet potato biscuits, I couldn't taste the sweet potato. So I didn't buy the for-sale version of the sweet potato rolls but instead bought the hazelnut chocolate version of the sweet rolls (2 to a package) and a container of a mix of chocolate and vanilla shortbread cookies. 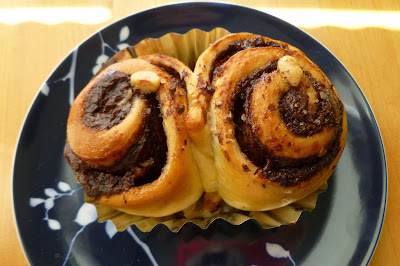 I fared better with these two selections than with the red velvet cake.  I warmed up the nutella rolls in the microwave for 10-12 seconds, like I do with the breads I buy at Asian bakeries, and they were good. The texture was soft and the chocolate added some decadence. The shortbreads were good as well although, in all honesty, they were something I could make myself.  But they made for a sweet snack and saved me the trouble of making 2 different shortbreads just for a few cookies. They had the added advantage of not being too sweet, too chocolaty or too buttery - they were just....nice. 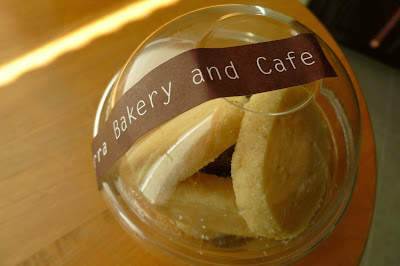 I can't say this is the most glowing review I've written for a bakery but it's an honest one and I still think it's worth going to la Terra to try out their products (I plan to try a few more next time I'm in the area in case I hit upon any favorites), especially to support a small business just starting out.