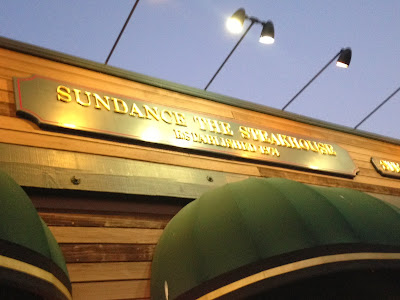 This is the kind of restaurant I seek out when I'm meeting friends for dinner - not because it's a steakhouse (although that doesn't hurt) but because it's small, local and family-owned.  It's also been open for years but this was my first time there, despite it being located just outside the Stanford campus and I lived near there for a couple of years. The downside is the parking lot is really small and during the dinner rush, you'll more than likely have to find street parking.  I'm legendary for my inability to parallel park so street parking is not something for me to look forward to and I was already running late due to traffic.  But I made it and it didn't take hardly more than 2-3 tries before I could get my car decently parallel parked.  Honest.
Although Sundance offers a variety of entrees, not just steaks, including the Ahi Tuna Sashimi above that one of my friends ordered, since it was my first time there, I had to get a steak they were known for.  According to their menu, that was their prime rib.  I got the petite cut (8 ounces) and added some prawns to the mix. Our waiter (or the menu, I forget) said they slow roast their prime rib for 8 hours.  I know nothing about roasting meats but whatever they did to it made it fabulous.  Just about fork-tender, juicy and tasty.  I don't like my steaks too bloody (i.e. no, I don't want it still twitching on my plate) and always ask for them to be cooked medium.  Some places overcook "medium", some places undercook it.  Sundance did it perfectly.  I enjoyed the shrimp too although the sauce it came in was a trifle sweet for me but I think that was just in contrast to the savory nature of the prime rib.
And of course, dessert.  There were three of us for dinner and that meant we split three desserts.  I know how to pick the right friends.  I ordered the apple pie a la mode - it being autumn, it's a good time to order anything with apples since they're in season and apple pie with ice cream is good anytime.
One of my friends got the mud pie since Sundance's menu calls it their "famous" mud pie.  I don't know how famous it is but I like a good mud pie as much as anyone.  What I liked about Sundance's is they made it with coffee ice cream which I prefer in a mud pie over vanilla, especially paired with hot fudge.
Our third dessert was the Butterscotch Creme Brulee.  I thought it was good but I have to give the nod to Lion & Compass' butterscotch pot de creme as being creamier and richer.  Still, three good desserts after a great prime rib dinner - life is good.