Crash Hot Sweet Potatoes - made October 22, 2013 from The Creekside Cook 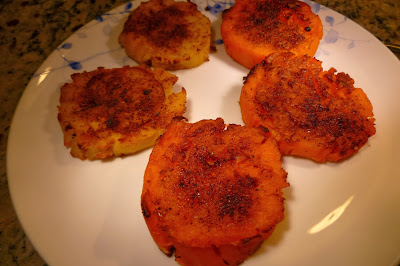 The original blog where I got this recipe from has a note that the recipes and pictures on her site are copyrighted so I'm not posting it here but you can click on the blog title to go directly to the recipe.

Essentially you slice sweet potatoes into thick rounds, parboil them for 10-15 minutes until they're slightly soft, dry them off, crush them with the bottom of a glass, brush with melted butter and olive oil, sprinkle with a spice rub on both sides and bake, turning them over so each side can brown. It's important for the boiled slices to be dried off or they won't get crunchy, according to The Creekside Cook and I proved that to be true.  I don't think mine were completely dry as they didn't get very crisp on the outside. But they were still good.
For  this recipe, I experimented and made it with 1 regular sweet potato and 1 Japanese sweet potato.  I had never heard of a Japanese sweet potato until my coworker told me about them and very nicely brought me 2 she had gotten from the farmers' market.  Apparently they're only available there and sometimes at Whole Foods. A google search also says they're typically available just during fall so now would be the time to stock up on them.
It's a little startling to see the white inside of a sweet potato which makes it look like a regular white potato but it really does taste like a sweet potato.  As a matter of fact, after I made this recipe with both kinds of potatoes, I found myself liking the Japanese sweet potato better.  It didn't get as mushy as the regular sweet potato and it tasted just as good.
And remember I mentioned I had the best sweet potatoes ever in China? One thing I failed to mention is although they told us at the time that they were sweet potatoes, they too were white on the inside so I thought at first they were regular potatoes and they were referring to them as "sweet" because of the caramelized outside.  But they really did taste like sweet potatoes.  Well, problem solved - they must have used Japanese sweet potatoes.
This was a good way to make sweet potatoes, the Japanese or regular kind.  Make sure you slice them into thick rounds as you do crush them with the bottom of a glass which would flatten them even more so you don't want them too thin or they'll bake more like chips than slabs.  I think I might've boiled the regular sweet potato a little too much as they got mushy and hard to smash properly. If you're already planning your Thanksgiving menu, this might be a nice change from the usual sweet potato casserole.