Lemon Angel Hair Pasta with Shrimp and Spinach - made November 17, 2013 adapted from The Recipe Crayon Box 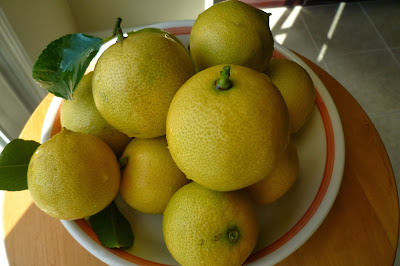 I did my first mass harvest of my lemon tree a short time ago. I think it was easier not to notice how many lemons were on it when the lemons were all green and blended cunningly with the equally green leaves.  Now that a number of them are turning yellow, it's more obvious that my one little dwarf lemon tree has a lot of lemons on it. I mean, a lot.  As in I clipped over a dozen lemons for the first harvest and it looked like I hadn't touched the tree at all. Eeek. Prepare for a lot of lemon recipes appearing on my blog for the next month or so. 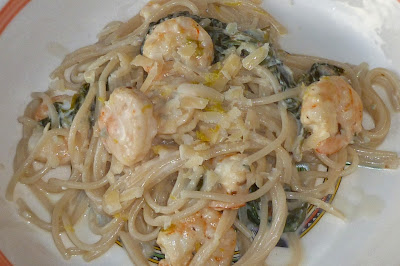 Starting with this one.  Given the plethora of lemons my little tree is poised to grace me with, I don't know if I can make them all into desserts so might as well go for a savory dish or two.  This one had the added advantage of using spinach which I also needed to use up before it wilts on me. I subbed out shrimp for the chicken in the original recipe but you can use either or both.  I also thought I should add the spinach to the sauce while it bubbled to cook it down a bit.  That turned out to be unnecessary and if I make this again, I'd probably cut up the spinach and only add it at the last minute.  Actually, I will probably make this again because it turned out pretty well and I liked it even better than the Lemon Chicken Pasta I posted earlier..  The sauce is a bit thin which is good because I didn't want a thick or heavy cream sauce but it was the lemon that made it really tasty. There's just something about using really fresh lemons that adds to the taste; the tartness of the lemon juice paired very well with the garlic and the creamy cheesiness of the sauce. This has the added bonus of being easy to prepare so it's a great option for a quick weeknight meal. 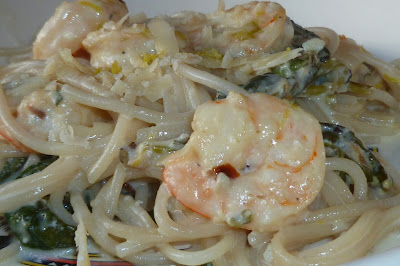