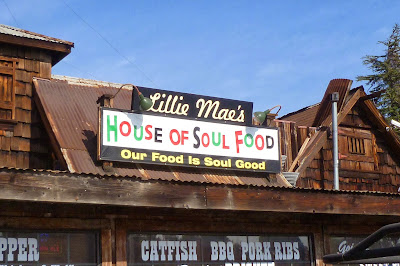 A friend recommended Lillie Mae's House of Soul Food saying she'd heard good things about it.  That's usually all I need to try out a place so when a coworker and I met for lunch, I suggested we try out this place.  It's in a bit of a weird location, kitty corner from a Costco and right near the airport.  I'd been to that Costco before but had never noticed the restaurant. 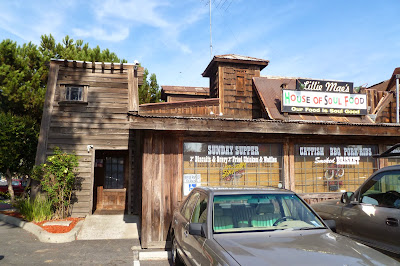 It's got a bit of a "dive" vibe but that only made me more hopeful because you know those types of places can have really good food.  The menu was also right up my alley with ribs, chicken, and beef, all offered in bbq sauce or, in the case of the chicken, you can also get it fried.  There was also a good selection of sides, including my favorite sweet potato fries.

Depending on your choice, you can choose a lunch of under $10 or pay a few dollars more for a combo for $12-$15.  Since I wanted to try a little variety, I opted for the combo of BBQ pork ribs and chicken with sweet potato fries.  My coworker got the brisket with sweet potato fries and sweet tea.
The good: the sweet potato fries were excellent, crisp on the outside and mealy inside and not greasy.  The sauce for the BBQ was also quite good, not too sweet and just really good flavor. For the price, they give you a generous helping so if you like barbecue, you're getting your money's worth.

The less good: the chicken was tender but the pork ribs were not.  I think I'm spoiled with my mom's bbq ribs that just fall off the bone and you could cut with a fork.  These ribs were much more hefty and chewy.  Alas, they only offered butter knives so cutting through it was even harder.  Two generous ribs were also covering the chicken underneath and they all had to share the same plate as the sweet potato fries and two halves of a slice of whole wheat bread.  So eating was rather awkward.
My coworker's choice of the brisket was more manageable on her plate and I had a taste.  They seemed to use the same barbecue sauce so it was good although still not as tender as I've had in other places. Her sweet tea, according to her, was also really sweet.  Similar reviews on yelp suggest that you may want to dilute the sweet tea with some water.  I don't know if the restaurant was having an off day or I just ordered the wrong thing.  I hate to give a bad or even lukewarm review based on just one visit but unfortunately, I can't say I had anything that I would be dying to come back for. If anyone else would want to go, I'd certainly go along and try something else to give it another chance.
Posted by Pastry Chef Baking at Monday, November 18, 2013