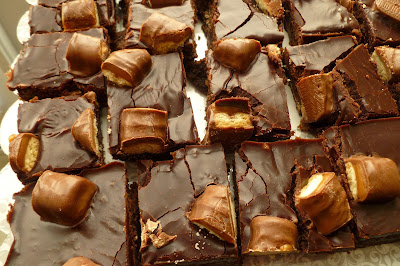 We're entering into that time of year where I don't experiment as much with new recipes and go back to tried and true ones.  Mostly because I bake a lot of my holiday gifts and don't want to take a chance with something not turning out. Not with my baking schedule and deliverables.  However, that's not to say I can't put a little twist on something to give it a different spin. And this is also where I say I'm not going to be experimenting with new recipes but that ends up being a lie.  But this time, for these brownies, it's the truth. 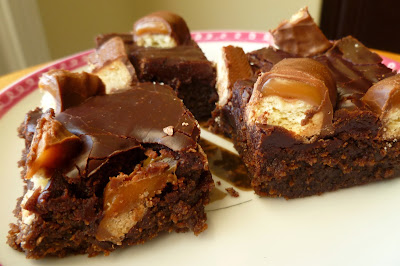 I had some caramel-filled chocolates and a bag of Twix from my aborted Halloween night and there's no better place to put them than in brownies.  I had also made Texas Vanilla Cake with Chocolate Frosting earlier for work but forgot that one frosting recipe made more than I wanted to use on the cake so I had leftover frosting as well.  So it was a perfect aligning of the stars to put it all together into one decadent brownie. 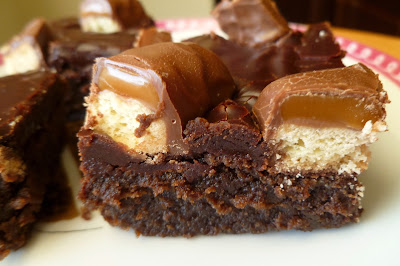 I made these for my 13-year-old nephew's birthday party - I figured a bunch of teenage boys could mow through some chocolate treats fairly easily so I needed a recipe that made a 9 x 13 pan.  Click on the links below for the actual recipes to put these together or else use your favorite brownie recipe and chocolate frosting recipe. Note: these are best eaten the day they're made while the shortbread in the Twix is still crisp.  They do ultimately soften because of the moistness of the ganache and exposure to air. 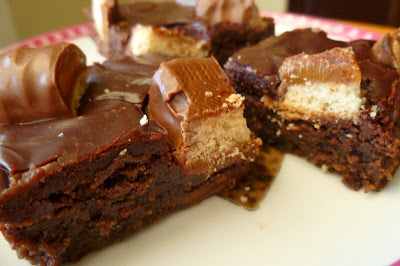