A more somber note: as you may have seen in the news recently, Haiyan, the worst typhoon in history, has just hit the Philippines with winds up to 200 mph.  Thankfully, all of my relatives are safe but the death toll is climbing into the thousands from the devastation and many are cut off without power, supplies or aid.  Save the Children, along with other organizations, is launching disaster relief efforts.  I don't do this often on my blog but in case you're inclined to help, here's a link to just one of many organizations sending aid for rescue and relief efforts to countries in Haiyan's path, including the Philippines, Laos and Vietnam.  Thanks. 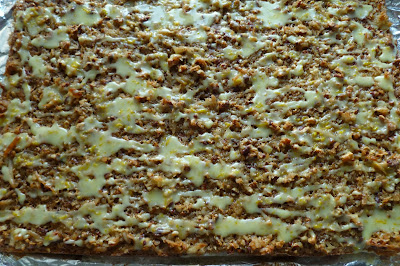 Back to the original blog posting: If you ever wonder why I sometimes have the oddest combination of recipes, it can be easily explained by my recipe ADD.  I have a ton of baking books and, in my pre-pinterest days, I would often flip through them, type up whatever strikes my fancy at the time, and file in my "baking recipes I need to make someday" folder. Recipes languish in that folder in my computer until the fancy strikes me again and I move it from the folder to a "draft" post on blogger. It might then hang in limbo in that status for some time until I get sick of having it "nag" me to make it. So I do. 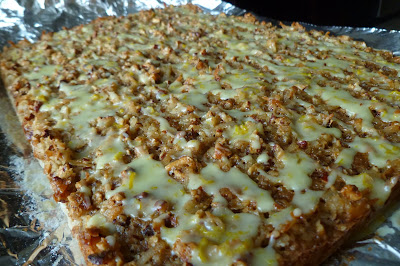 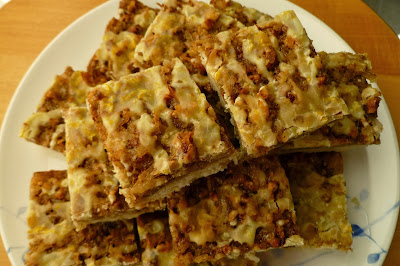 Hence this random bar cookie thrown in.  It must've appealed to me at the time I wrote it up but when I looked at it recently, I thought "hmm, I don't know if I would like orange glaze on a coconut pecan bar cookie". But I had extra glaze from the Orange Bundt Cake that I made earlier so I thought I might as well (finally) make this bar cookie too. 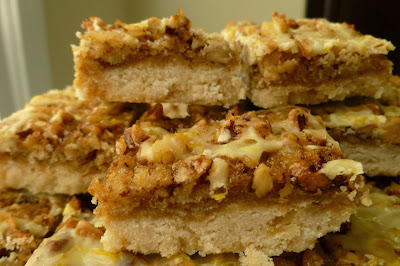 As bar cookies go, this was very easy to make.  Can't say I really loved it though and it turns out I didn't like it with the orange glaze and would've preferred a vanilla glaze instead.  I like the shortbread layer, I like coconut, I like pecans.  But adding the orange glaze added another flavor I didn't think was necessary because the coconut and the pecans already had it going on. If you like this combination of flavors, this is a good bar cookie.  If you don't, substitute milk for the orange juice to have a simple vanilla glaze instead.  If I make this again, that's what I would do. 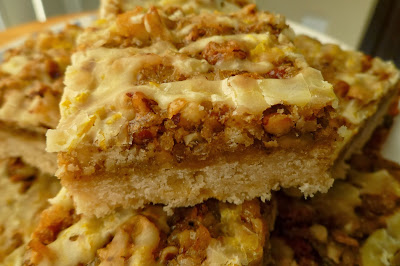 1.     Heat oven to 350˚F.  In small mixer bowl combine all crumb mixture ingredients.  Beat at low speed, scraping bowl often, until well mixed and particles are fine (2 to 3 minutes).  Press on bottom of 13 x 9-inch baking pan.  Bake for 15 to 20 minutes or until edges are very lightly browned.
2.     Meanwhile, in same small mixer bowl combine all filling ingredients except coconut and pecans.  Beat at medium speed, scraping bowl often, until well mixed (1 to 2 minutes).  By hand, stir in coconut and pecans.  Pour filling over hot partially baked crust.  Continue baking for 17 to 20 minutes or until toothpick inserted in center comes out clean.
3.     In small bowl stir together all glaze ingredients.  Drizzle glaze over warm bars.  Cool completely; cut into bars.
Posted by Pastry Chef Baking at Sunday, November 10, 2013