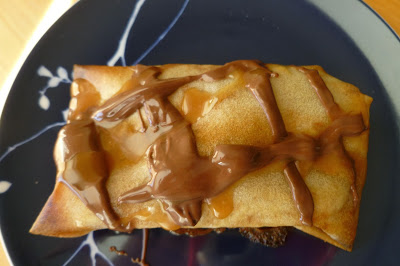 Want a super easy dessert recipe with caramelized bananas in a crispy wrapper topped with caramel and nutella?  Then read on, MacDuff.  This is reminiscent of turon, a Filipino dessert of bananas and sometimes langka (jackfruit) rolled into a lumpia wrapper and fried to crunchy goodness.  This is the healthier version since it involves baking rather than frying.  But it still has the same goodness of a "fried" banana.  I was only making this for myself so I halved the amount of brown sugar and cinnamon and only used 1 banana that I sliced and distributed between two lumpia wrappers. I still have leftover brown sugar-cinnamon but I'll use that for another dessert. 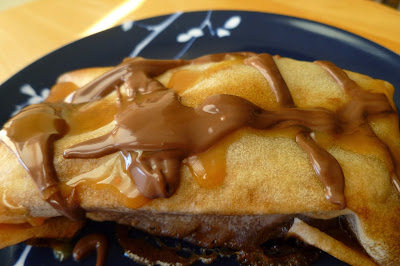 You can get lumpia wrappers at any Asian grocery store.  My mom gets them from 99 Ranch and I get them from shopping in her refrigerator since I rarely go to 99 Ranch myself and she always has them on hand for making lumpia :). This was super easy to make and they really did get crunchy except in the middle but that was okay.  The bananas caramelized in the baking and paired well with the brown sugar and cinnamon it was dredged in.  The only caution is when you roll them up in the lumpia wrapper, roll them tightly so that none of the melting insides leak out.  Otherwise they won't be as pretty.

Mine didn't come out as nice-looking as the ones on the Imperial Sugar site.  I could've wrapped the banana slices more tightly in the wrapper and made them more cylindrical instead of flat.  The original directions about how to roll them aren't very clear other than rolling into a cylinder but I like to wrap them completely, including the sides so I bring the bottom of the wrapper up over the bananas, fold over the two ends to almost meet in the middle (like an envelope) and roll the whole thing into the top, keeping the seam down during baking.  Regardless of their appearance, this was really good as the lumpia wrapper did get crispy in the oven and the baked banana caramelized beautifully.  Top with a little melted nutella and some drizzles of caramel?  Heaven in a bite. 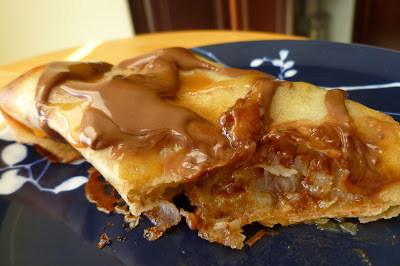