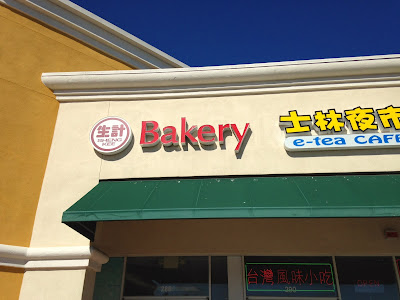 Sheng Kee Bakery was started by a mother in Taipei, Taiwan and her children have continued with their baking tradition in the Bay Area.  They have 12 locations and I've been to three of them without even realizing they were a chain.  I just knew I liked their products. 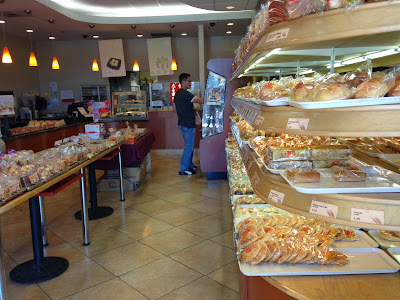 Like many Asian bakeries,they have a plethora of filled breads and rolls, individually wrapped and displayed along with cakes.  The packaged breads and pastries fill trays lined on the shelves and, like Paris Baguette, it's a self-serve model where you take a tray and a pair of tongs and help yourself. 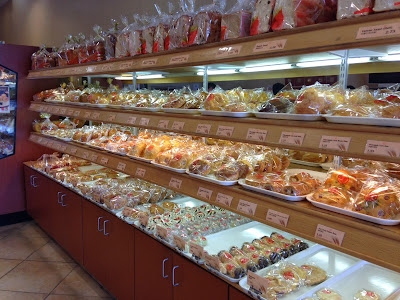 Whole cakes are displayed in a refrigerated glass cakes and are also typical of the cakes offered at most Asian bakeries: lots of fruit adornments inside and atop the cakes, leaning towards chiffons and whipped cream frostings and nothing too sweet. As a stereotype, many Asians don't like things that are all that sweet.  So it goes without saying that I'm not your stereotypical Asian since my sweet tooth works just fine and is happy to put in overtime.  Not surprisingly, cakes are something I don't get at Asian bakeries, not because of the sweetness level but because I don't like fruit in my cakes.  And I'm not a huge fan of chiffon cakes either. 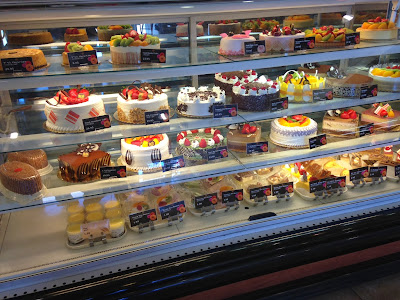 What I do get at Asian bakeries, however, are their bread products.  My top 3 go-to favorites are the cocktail bun, the baked pork bun and the coconut roll.  The cocktail bun is similar to what's served at dim sum but they're sold in bigger sizes at the bakeries and dwarf their more petite dim sum brethren.  The filling for a cocktail bun is coconut, butter and sugar so don't confuse it with a custard bun which is filled with, you guessed it, custard. 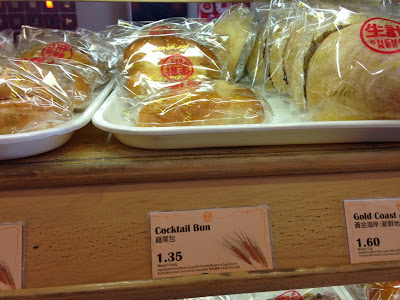 I like to get the baked version of the pork bun rather than the steamed one because the bread is better.  Asian bakeries sometimes sell the steamed version as well but they serve it hot or at least from the warmer near the cash register.  I can't remember if Sheng Kee does but I think I've been in one that does. 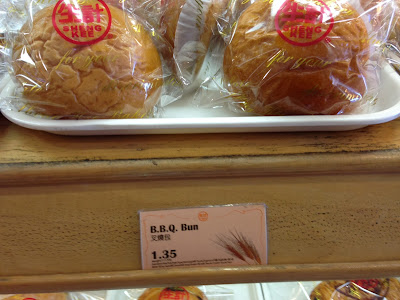 My last favorite is the coconut roll.  It's similar to the cocktail bun and I'm sure the ingredients are the same but might be proportioned differently. Think of the coconut roll as akin to a cinnamon roll but shaped like palmiers without the palmier flakiness.  Instead it has the bread-y consistency of the cocktail bun and instead of the cinnamon filling that a cinnamon roll has, it has a coconut filling. It's hard to describe if you haven't had it before; all I know is I love it because I love bread and coconut. 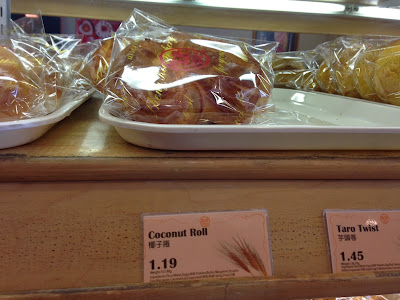 Lastly, you'll notice the prices for each of the products I've mentioned and yes, another plus to Asian bakeries is you can get cheap, tasty baked goods.  My normal trifecta of filled breads comes to less than $4. While other Asian bakeries have similar pricing, I prefer going to Sheng Kee because their particular versions of what I get are better (to me).  The ratio of filling to bread is just right in both the cocktail bun and coconut roll.  The baked pork bun could use a little more filling but the bread is pretty good. I like to pop each one into the microwave for 10-12 seconds before consuming.  The bread will warm up just slightly and be the perfect consistency with the filling.