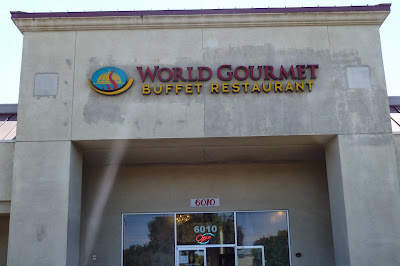 World Gourmet is a Chinese buffet restaurant. When they first opened, their price point was a little high but I think they realized that when business didn't take off.  Since then, they've lowered lunch to something like $10.99 for adults with a 10-15% discount for seniors.  The only reason I don't know the exact price is I only come here with my parents and my dad always pays :). They also send out coupons in the local mailers so we usually come here then.
It's not that it's a bad place to go but I can't say any particular dish is striking or something I would make a special effort to come here for. It's just simply a buffet and they offer a wide variety of dishes like most buffet places.
From seafood, soups, and fried foods to typical Chinese dishes and a few dim sum offerings to sushi and Mongolian BBQ, there's a little something for everyone, including fresh fruit, an ice cream machine, cookies and egg custards for dessert.
Despite all the variety, I have to admit I usually stick with a few tried and true things and call it a day. If I'm low carbing, this is a viable choice since I can get chicken a couple of different ways plus some beef stir fries and the baked fish. I just skip my normal siu mai, gyoza and General Tso's Chicken.
But the hard (First World problem) part for me at buffets is I usually can't eat that much in one sitting.  Yes, there have been exceptions to that but in general, unless I've just come for a 5-6-mile run or longer instead of an hour of sitting down at church, I don't get my (or my dad's) money's worth at a buffet.  There's some element of it being a food trough that goes against the grain for me.  I like to eat but I'd rather have a reasonable portion of really good food than a lot of mediocre food.
What it is good for though is if you have a large group or if you want to throw a party here.  They have several sections of the restaurant that can be leveraged for large parties and you pay a per-person fee and get a room to yourselves (depending on how many people you have) and your guests can help themselves to all the food.  It's handy when you have to account for a variety of tastes and preferences plus want someone else to do the cleanup.
Otherwise, honestly, I say the food is just "okay".