Copenhagen Crown Bakery - visited November 15, 2013 (linking to their yelp page as their direct site goes to a hosting page that tells you nothing about the bakery) 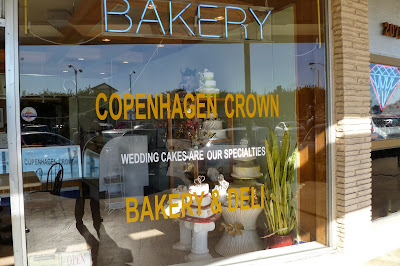 After my coworker and I went to Thaibodia, we walked a few doors down to Copenhagen Crown Bakery, which, in reality, was a big reason why we went to Thaibodia in the first place because of its proximity to this bakery that we both wanted to try. My coworker had seen it first from a previous Thaibodia visit and I'm always willing to go along for any new bakery discoveries so it took no little persuading to get me to join her.
The bakery had not only glass display cases showcasing their goods but also a number of tables and chairs as they also offered a deli-type selection of "real food", including salads.  We had already eaten though so we were just there for the sweets. One half of the big display case was devoted to breads and cookies and the other half to more traditional fancy bakery fare, namely cakes, both as whole cakes and as individual slices.  I like that I could buy individual slices of different cakes so that I could taste a variety without being beholden to finishing an entire cake. 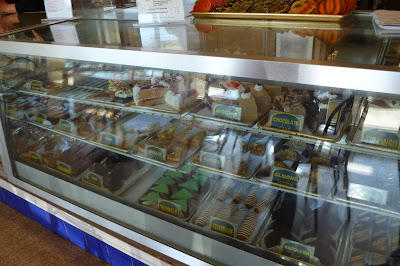 Similar to la Terra Bakery, the cake slices were protected in plastic sleeves so you could see the cake layers but the cut edges didn't dry out from being exposed in a refrigerated display case.  The man behind the counter who waited on us was patient as we perused the displays and made our selections.  He was also kind enough to let us pick which particular slice we want.  Normally I'm not that picky but since he didn't seem to mind, both my coworker and I wanted cake slices that weren't end pieces because neither of us wanted the additional frosting accompanying the ends. 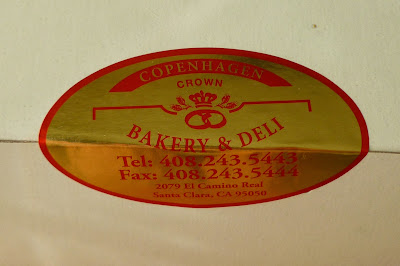 I got a slice of the burnt almond cake, a slice of red velvet and a cream puff.  According to the yelp reviews, their specialty were the cream puffs.  While I'm not a big cream puff fan, I was willing to play sheeple and try it out. I'm glad I did because the cream puff was actually quite good.  Their filling was real pastry cream, like the kind I make myself, not overly goopy but with a great vanilla flavor and creamy texture, almost like a creme brulee without the brulee.  The puff pastry was more reminiscent of like those flaky apple turnovers from Pepperidge Farm although not as buttery.  It was good but I think I like the cream puff shell from Beard Papa's better. Yet I prefer the pastry cream filling of Copenhagen's better than Beard Papa's. Copenhagen's cream puff was also rather sizable, almost twice the size of a Beard Papa cream puff and is better meant split for two. Although I confess I ate the whole thing by myself just fine....
The cake slices were also pretty tasty although the red velvet was just okay in my book.  It was better than la Terra's in that it actually had more flavor and the cream cheese frosting was very complimentary to the cake.  To my picky taste buds though, although it wasn't dry, the red velvet could have been just a touch more moist.  But I have no complaints on the burnt almond cake.  Between the two cake slices, that was the better one.  The texture of the cake was soft and fluffy with good vanilla flavor.  I'm not big on whipped cream frosting and I scraped some of it off but I loved the toasted almonds on top of the cake (and I'm not normally a fan of nuts with my cakes). I might even like Copenhagen's burnt almond cake better than the one from Dick's Bakery, another local bakery famous for its burnt almond cake.
I didn't ask what the individual prices were for what I was buying and maybe I should have because I was a little surprised that for just those 3 things, the total came to $10.55.  That's an average price of just over $3.50 each which, for the size of the cream puff and the cake slices, is on par with bakeries like Icing on the Cake but not cheap like Asian bakeries such as Sheng Kee. Still, the items I've tried so far were pretty good so Copenhagen Crown Bakery is worth future visits.
Posted by Pastry Chef Baking at Saturday, November 23, 2013