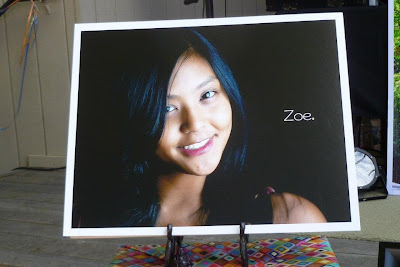 If you've followed my blog for awhile, you might remember last year when my friend Maria's daughter, Zoe, passed away from Ewing's Sarcoma, a rare form of bone cancer, just 5 days after her 16th birthday. I don't think of Zoe as having "lost" her battle to cancer as there's nothing remotely about losing in this girl.  She won hearts and minds from those around her with her courage and strength and inspired so many with her faith and grace.  Zoe's legacy lives on in those who love her and keep her spirit alive.  Two manifestations of that are the Zoe Inciong Memorial Scholarship and the Zoe Means Life Scholarship.  The first is awarded to scholar athletes like Zoe was (she played two sports and ended her sophomore year with a 4.39 GPA even during her treatments) and the second is awarded to students who face medical challenges like she did.  Funding for the scholarships come from fundraisers and community donations.  Now in its second year, I'm privileged to contribute in some small way to a bake sale being held this Saturday, September 21, at the Dan Oden Swim Complex in Union City, CA as part of the Second Annual Zoe Inciong Memorial Tournament for the water polo team Zoe was once a part of.

I will be posting recipes for all of these baked goods pictured below (although I'm quite behind on posts so please be patient with me) but I wanted to give a preview of what I made for the bake sale and urge anyone in the area to stop by and support the team and Zoe's scholarships.  The event starts at 8 am and admission for anyone over 12 is only $5.  There will be a silent auction with items donated from community businesses and members as well as a raffle and the bake sale with proceeds going to fund Zoe's scholarship awards.

I've been making cookie dough every night this week and took the afternoon off from work today to bake them off and make a few brownies/bar cookies.  I actually had plans to make even more brownies and a lemon bar but I ran out of time and steam.  But here's what I did come up with: