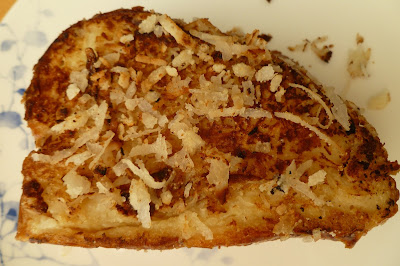 I saw something similar on pinterest but didn't pin it so I had to make up my own recipe.  I love French toast, especially made with my favorite challah from Trader Joe's.  I hardly ever have French toast for breakfast but see nothing wrong with having it for dinner. 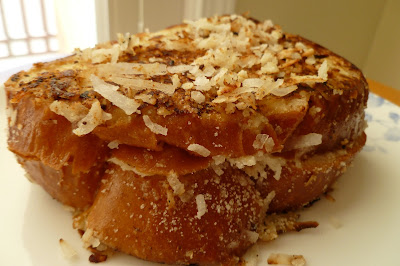 The pin I didn't pin on pinterest had a coconut stuffing, a concept I found intriguing and tried to replicate.  First you slice the bread to the thickness you want your French toast to have.  Then slice it in half but don't slice all the way through to the bottom.  You don't want two separate pieces of bread but one thick slice that flaps open so you can put the stuffing inside. 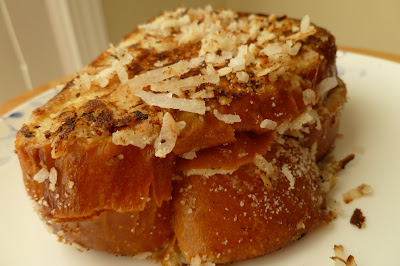 To go with the coconut theme, I decided to use coconut milk in addition to whole milk for the custard mixture to soak the bread in. I thought this turned out fairly well although the coconut milk didn't seem to stand out any differently than the regular whole milk but it might have also been hard to tell because the coconut sprinkles provided the coconut chewiness and flavor.  The only issue I had from considering this recipe completely successful is I didn't cook the french toast long enough.  My slice was too thick and the coconut coating on the outside browned before the french toast was fully cooked in the middle so the end product was a little mushier in the middle than I would have liked. One way to rectify it is to make the slices slightly thinner and cook the french toast over very low heat.  Otherwise, I like the concept of stuffed French Toast and will need to explore it a bit further. 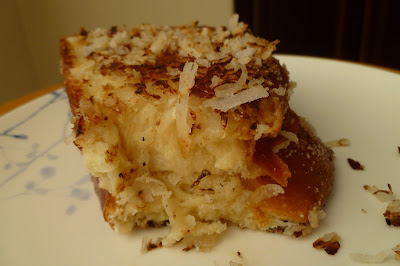