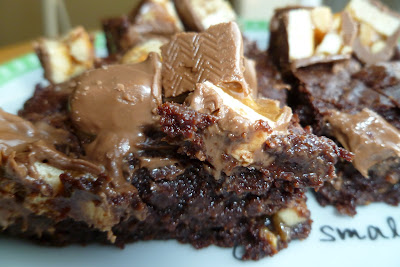 Sick of brownie recipes yet?  If you are, skip this post.  But if you do, you're going to miss out.  I love dulce de leche and I like Snickers.  I don't know why I've never put them together in a brownie before when I think I've made just about every combination I like already.  But I have rectified that oversight with this brownie.  I did modify the recipe slightly and my changes are reflected below.  I took these pictures when the brownie was just barely cool so they look a bit gooey.  They did firm up when they cooled to a nice chewy consistency.  I used Valrhona 90% dark chocolate so these were a walk on the dark side.  You can make them a little less dark by using a 60-70% semisweet chocolate but since I was adding dulce de leche, I went with the darker chocolate to offset the sweetness.

The dulce de leche wasn't as pronounced as I would've liked but I think that's because I couldn't use as much as I had intended because there wasn't much batter, even for an 8-inch pan.  I think this concept would work better with a larger brownie recipe.  But hey, the Snickers rocked. 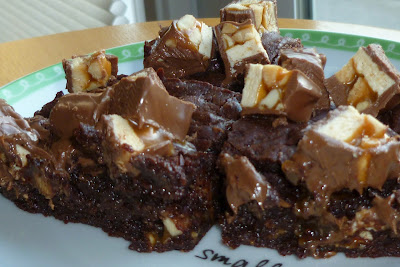 1. Position a rack in the lower third of the oven and preheat the oven to 325°F. Line an 8 x 8 x 2” baking pan with foil and lightly spray with nonstick cooking spray.
2. Melt the butter and chocolate together in the top half of a double boiler over gently simmering water and stir until melted and smooth. Remove from heat.
3. With a large rubber spatula or wooden spoon, beat the sugar and salt into the chocolate mixture. Beat in the eggs one at a time. Add the flour and mix vigorously until the batter is very glossy and pulls away from the sides of the bowl.
4. Spread half the batter into the prepared pan. Drop dollops of dulce de leche randomly over batter and cover with remaining half of the batter. Bake for 30 – 35 minutes or until a toothpick inserted near the center comes out with moist crumbs. 5 minutes before brownies are done, sprinkle remaining chopped Snickers over the top and let soften over the brownie in the heat of the oven.
5. Remove from oven and let cool. Remove the brownies from the pan and let cool completely before cutting into 2-inch squares. 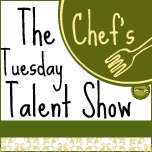