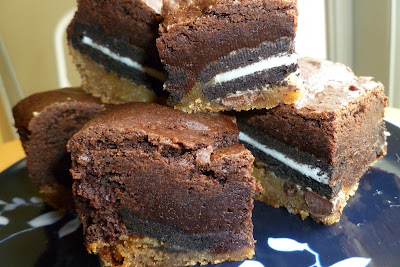 A friend sent me a link to a blog that showed a triple layer brownie: chocolate chip cookie crust on the bottom, Oreos in the middle and a brownie layer on top.  It was a great concept but both the bottom and top layers were made from (shudder) box mixes.  You know how I feel about mixes.  My snobby baking soul can't handle them except on rare occasions and only if enough other ingredients are mixed into the base mix so that you can't taste the mix-iness of the finished product.  But, regardless, the brownie was a great concept so I decided to recreate it my way: from scratch.

You can use almost any chocolate chip cookie recipe for the bottom layer but go for the ones that spread or aren't too cakey.  I chose this one as it was part of a recipe that uses the chocolate chip cookie as a crust for a tart.  I adapted the brownie recipe from Chocolate Ecstasy: that recipe called for oil but I substituted in butter for better flavor and increased the flour from 2/3 cup to 3/4 cup for slightly more substance.

I liked how this brownie turned out.  I originally baked the chocolate chip layer for only 10 minutes since I was afraid of overbaking it once I layered the Oreos and brownie batter on top but it probably would've been better to bake a few minutes longer to just barely past the wet dough stage.  Still, it was pretty good.  The base was buttery and moist and the brownie layer was all chocolate glory with the flavor being fortified by a good-quality dark cocoa (I always use Pernigotti).  And I don't have to rhapsodize about Oreos in anything - they speak for themselves.

This was the last thing I made during my nieces' visit last weekend and I packed them up for them to take back to their respective schools and friends.  They gave it the highest accolade in their collegiate vocabulary: "these are bomb".  The brownies were also classified as "sick" which apparently doesn't mean what my generation thinks it means but is actually also a positive accolade.  I really must keep up with the latest lingo.

1.   Preheat the oven to 350⁰F.  Line a 9-inch square baking pan and spray lightly with nonstick cooking spray.
2.   Sift the flour, baking soda and salt into a medium bowl and set aside.
3.   In a large bowl, using an electric mixer on medium speed, beat the butter, brown sugar and granulated sugar until smoothly blended, about 1 minute.  Add the egg and vanilla and mix until blended, about 1 minute.  On low speed, add the flour mixture, mixing just until incorporated.  Stir in the chocolate chips.
4.   Layer evenly in the prepared baking pan and bake for 12-15 minutes.
5.   Line top with Oreos, making an even layer.
6.   While crust is baking, make brownies as directed below.  Pour brownie mixture and return pan to oven.

1.  Melt the chocolate and butter together and cool slightly.
2.  Beat eggs, sugar and vanilla extract together.  Stir in melted chocolate-butter mixture.  Beat until evenly mixed.
3.  Sift flour and cocoa powder into the bowl and fold in thoroughly.  Do not overmix.
4.  Pour brownie batter over Oreo layer, covering them completely.  Bake 30-35 minutes or until a toothpick inserted near the center of the brownie comes out with moist crumbs.