It's National Pancake Day and normally I would pay homage to one of my favorite breakfast foods with a pancake recipe but today I am bucking the trend in favor of another breakfast-but-I-eat-it-for-dinner favorite: waffles!  I love waffles.  I love the traditional waffles smothered in butter or syrup (for some reason I don't like to mix both, it's one or the other for me, usually syrup for waffles, butter for pancakes).  And when we went out for my mom's birthday dinner a few weeks ago, I also loved the chocolate waffles we had for dessert at Outback Steakhouse.  So much so that I decided I had to make them myself.

This is the version from Outback Steakhouse - truly decadent and so good.  Four of us split this and it was perfect for sharing. 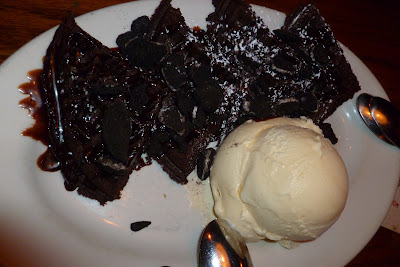 But first, uh, you might remember that I've been on my baking challenge for well over a year now.  The goal was to make at least one recipe from every cookbook I own and the "prize" at  the end of it was I would allow myself to buy Baking Style by Lisa Yockelson, one of my favorite cookbook authors.  When I started on this challenge, Baking Style hadn't even been published yet and it seemed easy enough at the time to swear off buying any new cookbooks until I was done with the challenge.  After all, I had so many cookbooks that I was afraid to count them.  All I knew is I have somewhere around 200 cookbooks and the only reason I didn't know the exact number is when I started actually counting them, when I hit 200 and there were still more, I stopped counting because I didn't want to know.  Tallying the count as I made a recipe from each book was the official way to count them because then I've ensured I've used them.

I broke the challenge a few months ago when, in a moment of weakness, I ended up buying Baking Style because it was on sale and I had a gift card.  Honestly, I just couldn't be expected to pass it up at a bargain, now could I?  So then I promised I would still continue with the challenge and not make anything from the book until I was done.  Um, yeah, I broke that promise too with this recipe.  In my defense, it was the only book out of several dozen that I checked that actually had a chocolate waffle recipe.  And I wanted chocolate waffles.  Plus I can justify almost anything when it comes to making sweets.  I'm still going to continue with my baking challenge, mostly because I actually am close to finishing by now and I always finish what I start.....most of the time.

So on to the waffle recipe.  I screwed up the first time I made this.  My nieces were visiting and I was making this at my parents' house for our dessert.  I mixed together all the dry ingredients at my place and had the liquid ingredients separate but measured out, ready to go for putting together at the last minute.  Which worked out great except I forgot the butter I had ready to go in my fridge.  As in I really forgot they were supposed to have butter in them when I was mixing the batter at my parents'.  The waffles still turned out pretty well despite being butter-less but they were more cakey and soft than waffly-crisp.  So I made a second attempt, making the batter properly the next day in my own kitchen.  This time there was more crisp around the edges although they were still somewhat soft.  I was afraid to cook them too much in my waffle iron because I didn't want to burn them.  But I figured out a good way to deliver on the texture - if you want them crisp, reheat them later by toasting them in the toaster oven.  Don't burn them though.  Just toast them enough to get the outside crisp but the inside should still be soft and chewy.  Flavor-wise, this was really good with an enhanced chocolate flavor fortified by both the cocoa powder and the unsweetened chocolate.  Use a dark cocoa for the full chocolate flavor.  And don't forget the vanilla ice cream on top of the warm chocolate waffle.  For super decadence, serve with hot fudge sauce and some chopped-up Oreos.

1. Preheat a 2-grid deep-dish (Belgian-style) waffle iron (each grid measuring about 4 ½ by 4 ½ inches).
2. For the batter, sift the flour, cocoa powder, baking powder, baking soda, salt and superfine sugar into a large mixing bowl. In a medium-size mixing bowl, whisk the melted butter, melted unsweetened chocolate, eggs, buttermilk, heavy cream and vanilla extract. Pour the buttermilk mixture over the sifted ingredients and stir to form a batter, using a wooden spoon or flat wooden paddle. Mix in the chocolate chips. The batter will be moderately thick.
3. Spoon a generous 1/3 cup batter into each grid, cover the iron, and cook until baked through (at the medium heat setting, if you waffler has one), following the directions supplied by the appliance’s manufacturer. Lift up the waffle squares onto individual plates, dredge with confectioners’ sugar, and serve immediately.