Pumpkin Snickerdoodle Bar Cookies - made September 20, 2014 from A Kitchen Addiction 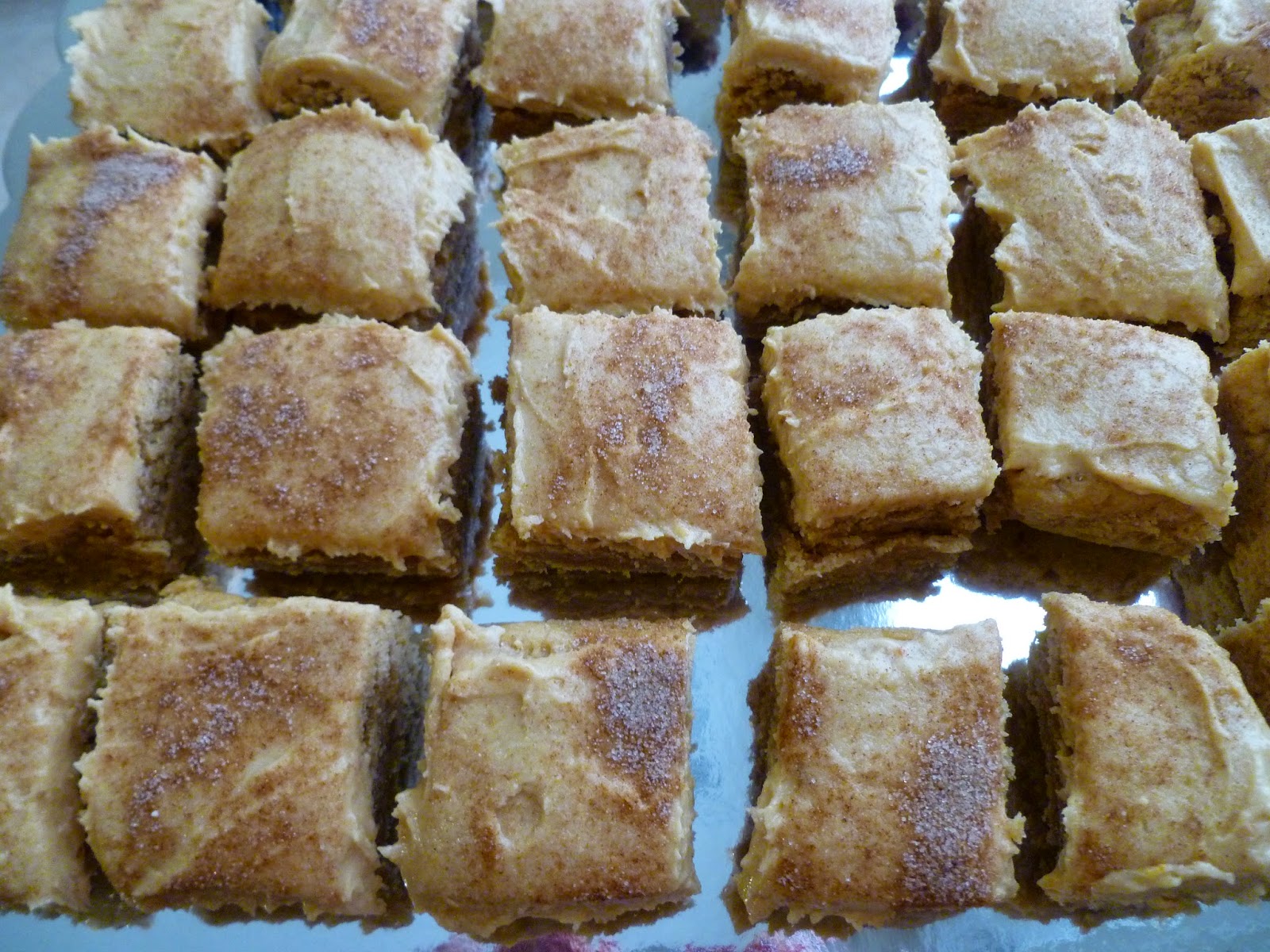 For my dad's 75th birthday party, I had ordered a couple of bundt cakes from Nothing Bundt Cakes but with 60 guests, I also had to supplement the birthday cakes with an assortment of desserts. Okay, I also wanted to more than I actually had to. 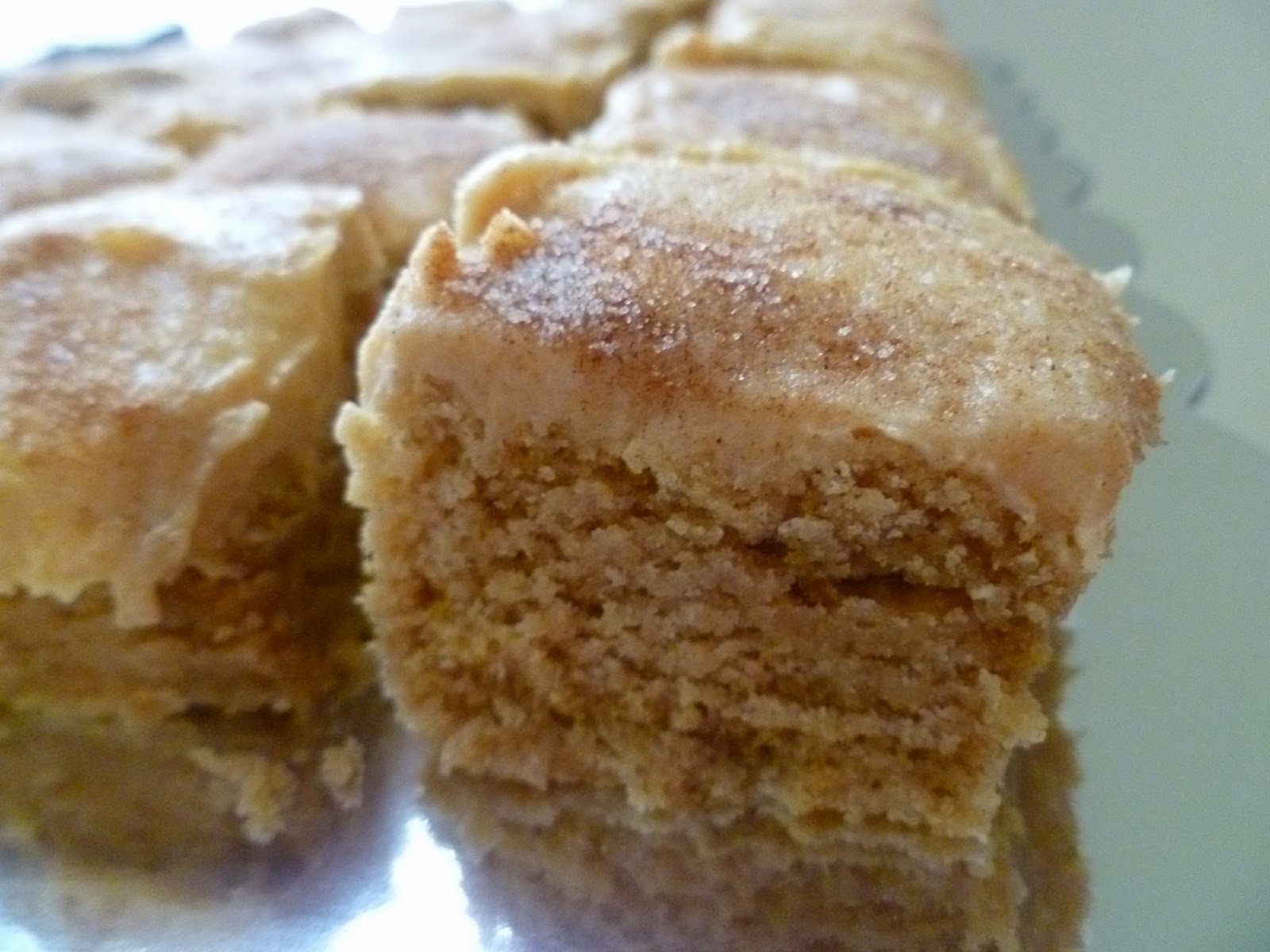 This is where I'm in my element - lots to people to bake for and I get to indulge in coming up with an assortment of different flavors and different desserts. I knew this day was coming and I knew my time to bake was limited because of how much I was working so it meant a lot of prep work and planning. In the two weeks leading up to the party, I was making cookie doughs to freeze and bake later and a Texas Vanilla Cake to freeze ahead of time and cut right before serving. 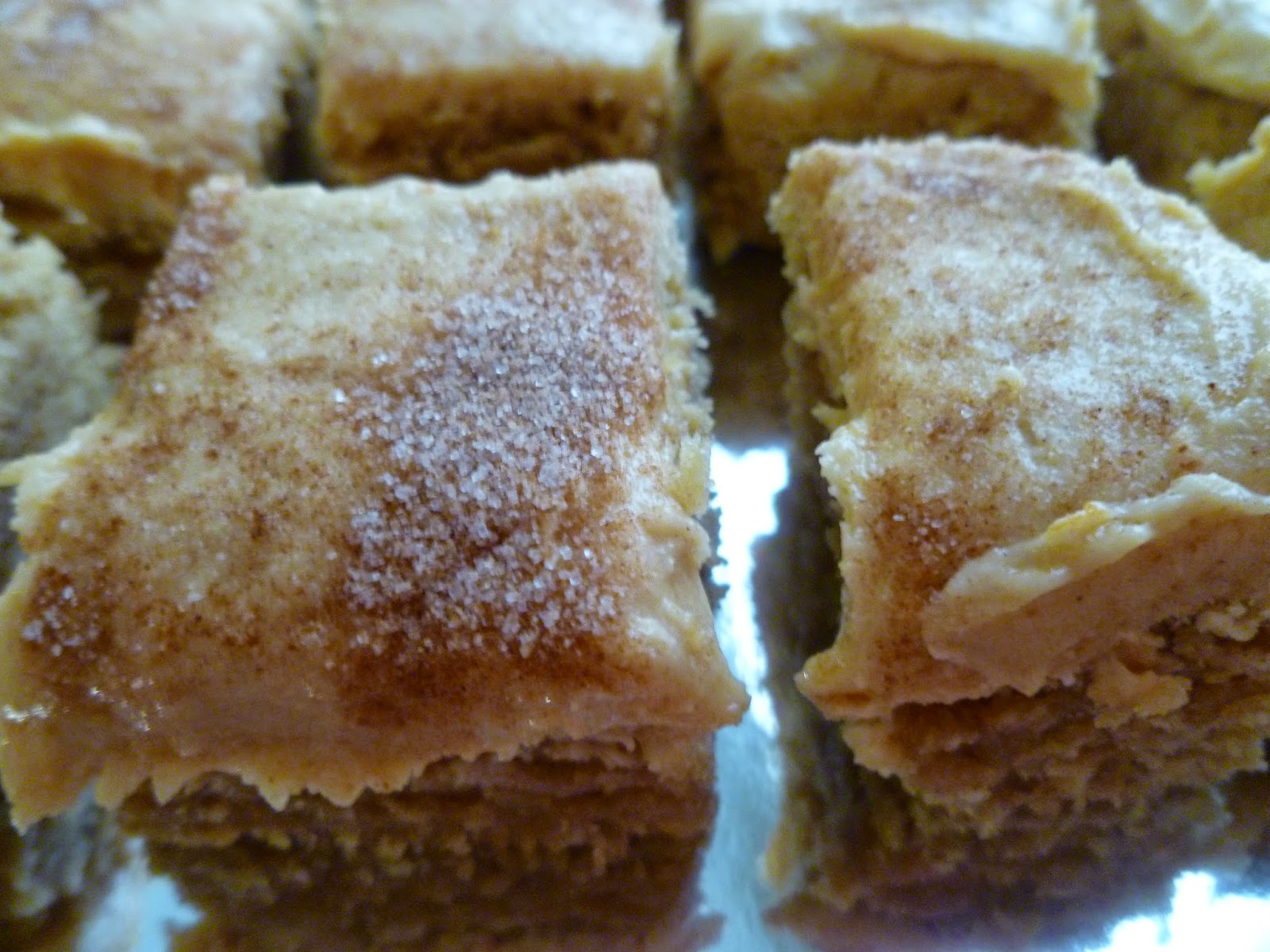 These pumpkin snickerdoodle bars, however, were an impulsive, last-minute addition. I was baking other bars the night before and on the morning of the party, I was baking off the cookie doughs. But then I had an attack of insecurity that I hadn't made enough dessert. So I dived to my pinterest board and decided to try out this recipe. The allure of it was how easy it was to make. And they lived up to their name. The cinnamon, cream of tartar and texture represented the snickerdoodle part. The pumpkin flavor isn't too strong but was just enough to justify the "pumpkin" part of the title 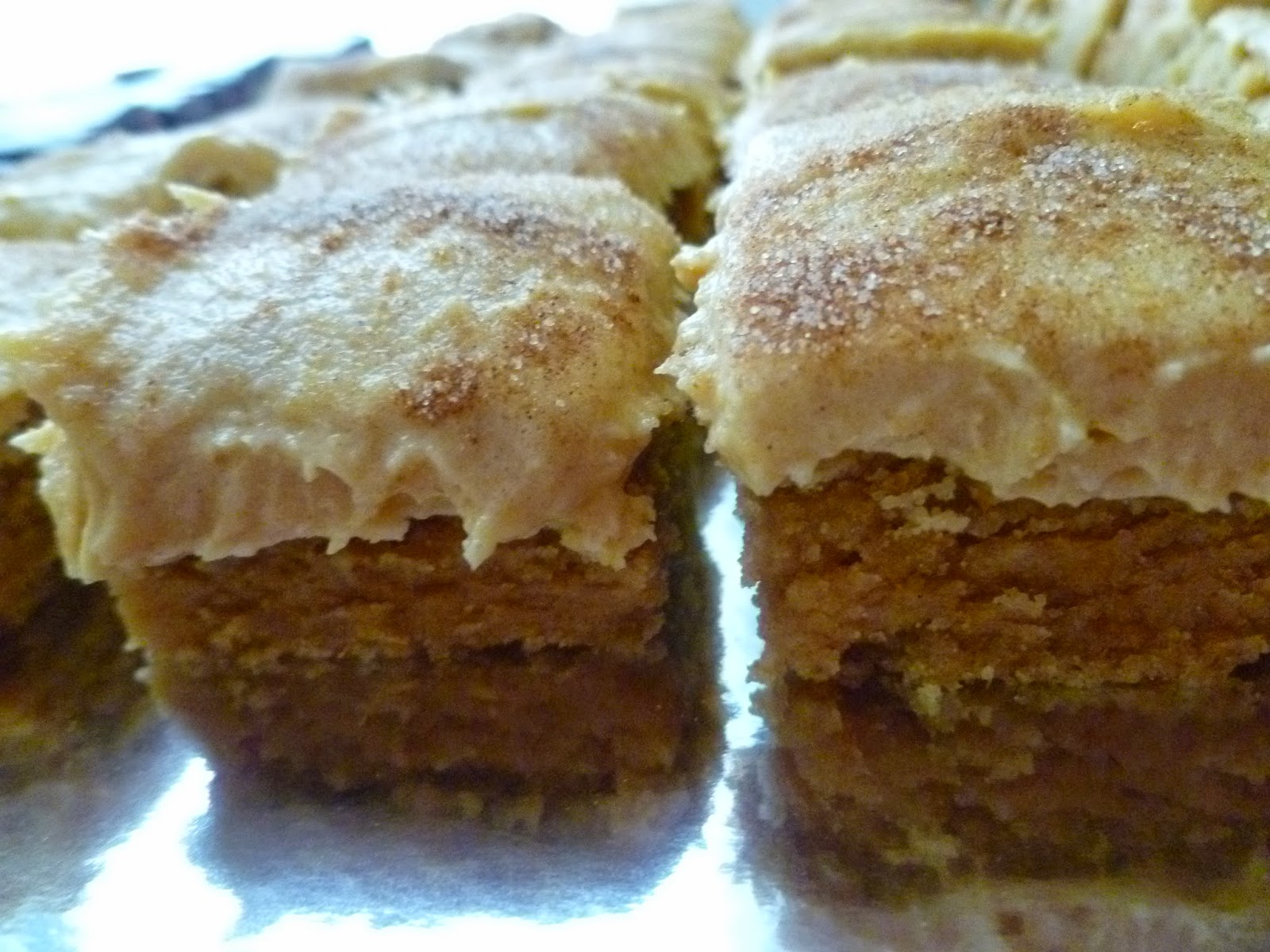 I will admit when I made the frosting and tasted it, I wasn't all that thrilled with it. It seemed too pumpkin-y. But when I frosted the bars, sprinkled cinnamon sugar over the frosting and tried a piece, the whole package worked. I liked the texture of the bars and I liked the flavor combination. You don't want to overbake these (or anything else) or you won't get the soft, moist texture. If you bake them for too long, the bars will be cakey and dry. Not even the frosting can save them then. But when (under)baked properly, these make a nice fall dessert. 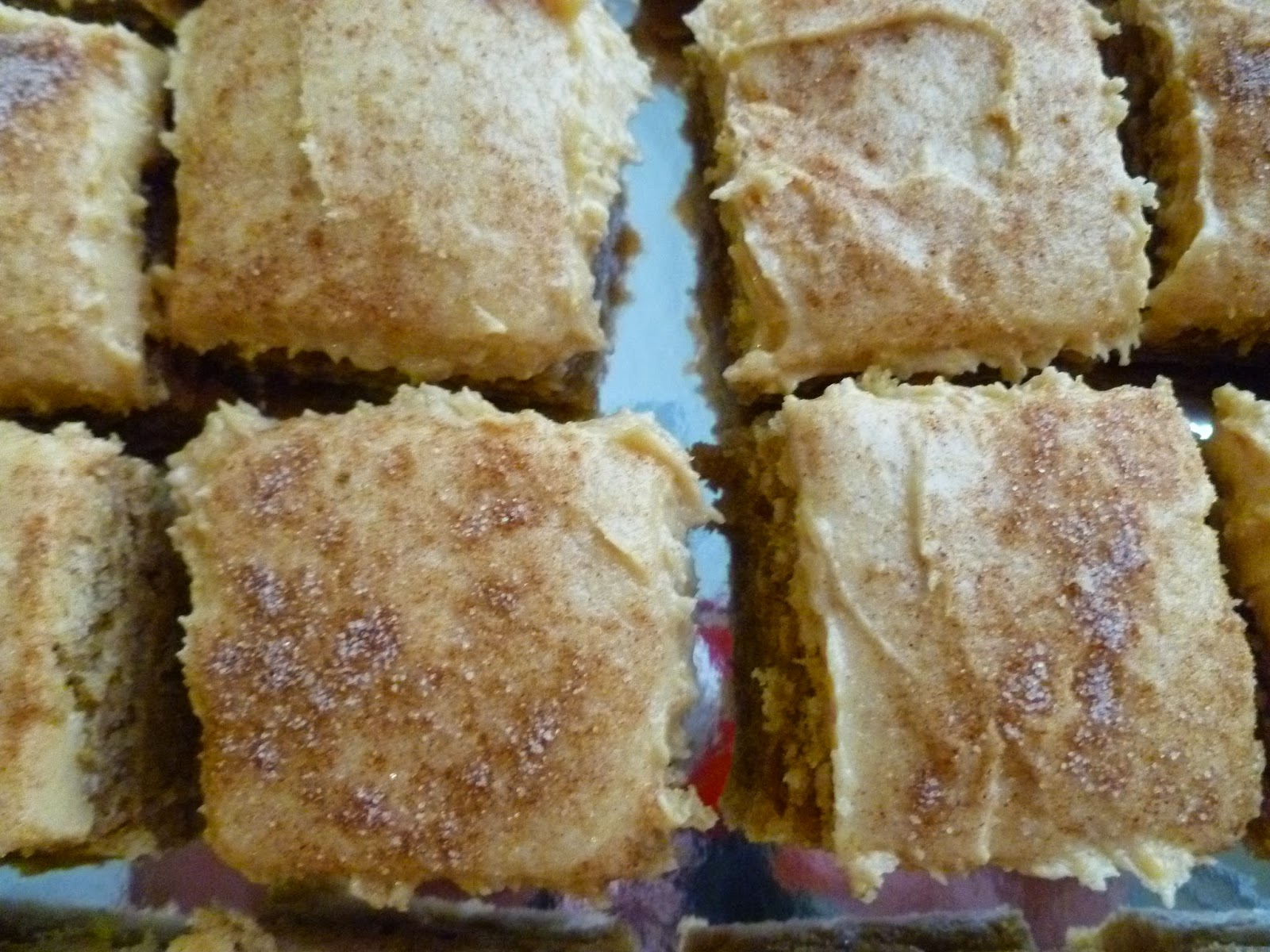