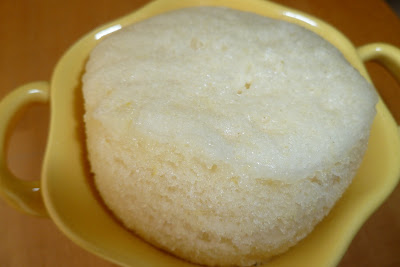 My mom is from a small town in the Philippines that's known for its puto, a steamed white cake best eaten warm with melted butter and a sprinkle of fresh coconut on top.  I remember when I was a kid in the Philippines, whenever we visited my mom's side of the family, we always had "Puto Binan" which was the town's local specialty.  The cakes were flat and in a rough rectangular or oblong shape, wrapped in banana leaves to keep fresh.  There are many varieties of puto and the mark of a good puto is its fluffiness.  You get the texture from steaming the cake rather than baking it.  Steamed "baked" goods are common in parts of the world where the majority of home kitchens don't have ovens, as is the case in the Philippines.  It's also common for puto to contain rice flour instead of wheat flour since rice is a staple there rather than wheat.

Ironically, this recipe is made with Bisquick so I don't know if I can call it really authentic.  But this is one of the recipes from my childhood so I'm sticking with it here. My mom used to make this when I was a kid and in honor of Mother's Day, I thought I would use the old family recipe and bring it over to my parents' house. Despite Bisquick as the main ingredient, this doesn't taste like fluffy pancakes like you'd expect from using Bisquick.  Instead, it really is a vanilla cake.  The directions are sparse but it's still an easy thing to put together.  Make sure you steam them thoroughly - if the puto is underdone, it'll be heavy and too moist.  Because you're steaming them, it's harder to overcook puto but don't leave them in there too long or they'll be tough.

Puto doesn't have a long shelf life so they're best eaten the day they're made.  If you have any left over, wrap in plastic and store in an airtight container.  When you reheat them, it's better to re-steam them.  If you're going to microwave them, cover with a wet paper towel and microwave for only a few seconds at a time until they're warm enough.  Don't leave in too long or the texture will toughen up and/or dry out.


2 cups Bisquick
1 cup sugar
1 egg
1 cup whole milk
1 teaspoon vanilla
1.      Mix all ingredients together and spoon into small greased ramekins.  Puto will rise so only fill the ramekins 2/3 full.
2.      Steam for 10 to 15 minutes in a steamer or until done, depending on the size of your ramekins (toothpick inserted in the center should come out clean).
Posted by Pastry Chef Baking at Sunday, May 08, 2011