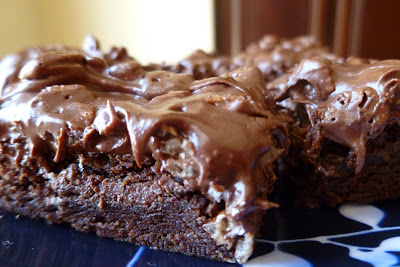 Thanks to my friend Hildy, I have an opportunity to contribute baked goods to a bake sale where the proceeds will go to Save The Children for Japan relief efforts.  The bake sale is on Sunday and I don't have a lot of time to put some donations together but I'm going to devote the next few posts to what I'm baking for the bake sale.  It'll be April 3, 10-2 pm in Menlo Park (email me if you want the address).  I can't be there due to other commitments that day but Hildy was kind enough to volunteer to pick up the baked goods from me on Saturday afternoon so that I could still contribute.

When I think "bake sale", the first things that come to mind are brownies and cookies.  They can be individually packaged and are a small commitment for an impulse purchase so they should sell easily.  And if they're chocolate, so much the better.  I know cupcakes are popular items but I'm leery as the quality can be inconsistent, the frosting needs to hold up under the sun for potentially a few hours and they go stale or dry out faster than brownies.  I can make brownies today and freeze them until the weekend then they'll be just as fresh on bake sale day. So brownies it is.

I used the brownie recipe from Bruce's Bakery Cookbook to make the brownie base but I decided to do something similar for the topping that I did with the Chocolate Peanut Butter Crunch brownies only this time, I went with nutella as the flavor of choice.  And Rice Krispies.  I don't know why but I've become enamored of using rice krispies in a chocolate topping.  Just something about the crunch of the crispy rice cereal providing a nice contrast to the smooth creaminess of the chocolate.  I have some ideas brimming for a blondie with a dulce de leche/rice krispie topping but I'm getting ahead of myself.

The directions aren't very clear in that they call for the butter to be softened then added to the melted chocolate so I wasn't sure if the butter was supposed to eventually end up in a melted state or not.  I saved myself a step and just melted both together as it would be hard to add even softened butter to melted chocolate and expect to stir it smooth without any non-melted butter lumps.  Risky to assume the heat from the chocolate can melt all that butter.  Otherwise, the brownie was very straightforward to mix together.  It was actually a slightly thinner layer than I normally like my brownies to be but since I was adding the nutella crunch topping, it was the perfect thickness to serve as the base for the topping.  If you do make it as a standalone brownie without the topping and prefer thicker brownies, bake in a smaller pan like a 10 x 10 or 9 x 9 and adjust the baking time accordingly.

Overall, these turned out to be pretty yum.  The brownie base was dark chocolatey-fudgy and the chocolate topping with the nutella didn't really "set" when I tried the taste test so it was more like a creamy thick chocolate frosting with rice krispies in the topping.  I didn't chop up any candy for the brownie like I did for the Peanut Butter Crunch brownies because I couldn't think of any hazelnut candy to complement the nutella and you know I wasn't going to add hazelnuts to the brownie.  Consequently, the nutella flavor is pretty subtle and almost lost in the chocolate.  But it's all good.  Now I just have to remember these are for donating to a good cause and not eat anymore.  Really.


5 ounces unsweetened chocolate, melted and cooled
¾ cup (1 ½ sticks) unsalted butter, softened
1 ¾ cups sugar
3 eggs
1 teaspoon vanilla extract
1 cup all-purpose flour
1 cup chopped walnuts (optional)
Nutella Crunch Topping
1 ½ cups semisweet chocolate chips
1 cup Nutella
1 tablespoon unsalted butter
1 ½ cups crispy rice cereal
1.  Preheat the oven to 350⁰F.  Grease a 9 x 13 x 2 inch pan or line with foil and spray lightly with nonstick cooking spray.
2.  In a large mixing bowl, combine the melted chocolate and butter and stir until smooth.  Add the sugar and stir with a wooden spoon until well blended.  Add the eggs and vanilla and mix well.  Mix in the flour and nuts, if using, and stir.  Pour the batter into the prepared pan.
3.  Bake for 30 to 40 minutes, or until the edges appear to be set (the center should still be soft).  Do not overbake.
4.  While the brownies are baking, place the chocolate chips, peanut butter, and butter in a medium saucepan.  Cook over low heat, stirring constantly until melted.  Remove from heat, add the cereal and mix well.  Allow this to cool for 3 minutes or so.  Spread the mixture evenly over the brownies once they’re baked.  Refrigerate until chilled before cutting.