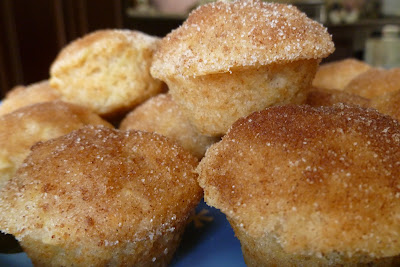 Another recipe and blog I found from Sweets for a Saturday (although I can't remember exactly which one since there are so many yummy-looking recipes linked up there each week and I ended up just bookmarking this one).  I loved how these looked on Cindy's blog post - almost like sugared doughnut holes.  I was in Berkeley earlier this week with one of my nieces and her classmate and after we hit Blondie's Pizza for an early lunch, we stopped at Kingpin Doughnuts which has been in business at the same spot even back when I went to Cal.  I was too full from the pizza to get anything from Kingpin but the two teenagers I was with got a glazed doughnut and some kind of fritter, both of which looked delicious but neither of which I had the room or the metabolism for.  So naturally I've been wanting a doughnut ever since.  Or something that looks like a doughnut and/or is covered in sugar like a doughnut would be.  This will do.

The cool thing is these are baked so that makes them instantly more healthy than being deep-fried.  (Never mind the butter, flour, sugar - hey, it's got apple in it.)  They don't use a lot of milk but the recipe still calls for milk and I had milk to use up so it was a good time to kill two birds with one stone - try a cool-looking recipe and use some a little more milk before its expiration date.  There was enough batter to make 24 mini muffins plus some extra for a small ramekin.  I didn't bake these for very long, maybe 10-11 minutes?  I'm terrible about timing things since I mostly go by look and the toothpick test.

OMG.  These are fabulous.  It's like eating a snickerdoodle in muffin form.  I couldn't really taste the apple though - this was more like a little cinnamon snickerdoodle muffin.  But overall they're quite good (yes, I'm using the plural since I had more than 1 mini muffin - oink) and would be great to serve at a brunch or an afternoon tea.  I wouldn't consider them in the doughnut category at all but rather, they really are mini muffins.  I worked out before I made these and now I'll probably have to do another workout to offset the taste test pieces I just consumed.  But they're worth it.  Thanks for the recipe, Cindy!  (Click on the title to go to the recipe on Cindy's blog.)
Posted by Pastry Chef Baking at Thursday, April 14, 2011