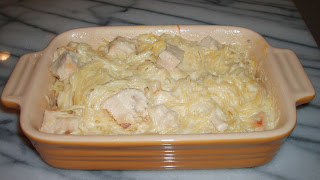 Chicken Tetrazzini - made January 10, 2010
When I was an undergrad at UC Berkeley, I lived at Asher House which was a house for Christian Science students at Cal and neighboring schools. Asher was a co-op, meaning the students who lived there took turns with house duties such as cleaning the common areas, grocery shopping and cooking for the house. One of my housemates, Amber, made this Chicken Tetrazzini recipe. Being pasta and chicken in a rich sauce, it was a good dinner to serve to starving college students on a budget. I don't know where Amber got the original recipe from but I modified it for my purposes today. I substituted fat-free half-and-half for the whipping cream and omitted the mushrooms since I don't like mushrooms. I used grated/shredded Parmesan cheese (the real kind, not the kind in the green cylinder that sprinkles Parmesan cheese dust). I cheated on the chicken and used the already cooked, grilled chicken breast strips from Costco. Much easier than starting with raw chicken breasts, pounding them, cutting them and frying them myself. Maybe next time.
Because of the substitution of the half-and-half for the whipping cream, the sauce isn't as thick or rich as I remember Amber's version to be but this probably still has a fair number of calories to it. I also didn't bake it as long as the recipe calls for as I don't like the top layer of noodles to get too crusty or hard. BTW, does anyone know the difference between tetrazzini and alfredo sauce? They both have the same type of ingredients in it: chicken broth, cream, cheese and flour as a thickener so they seem pretty much the same to me.
Chicken Tetrazzini
¼ cup butter
¼ cup flour
1 cup chicken broth
salt and pepper
1 cup whipping cream
2 teaspoons white wine or sherry
7 ounces spaghetti, cooked and drained
2 cups cubed, cooked chicken
⅓ cup sliced mushrooms
¾ cup Parmesan cheese