Black and White Creme Brulee - made February 27, 2012, chocolate mousse from Essence of Chocolate by John Scharffenberger and Robert Steinberg and creme brulee from Elegantly Easy Creme Brulee by Debbie Puente (book #198)
We have a restaurant chain in my area called Piatti's.  I hardly ever go there but once, long ago, I remember having this dessert that was a two-layer creme brulee and chocolate mousse.  I've only had it once and it was years ago but you can imagine how much I liked that dessert since I still remember it to this day.  Sadly, the last time I went to Piatti's (also years ago), they no longer offered it.  I distinctly remember the chocolate mousse layer was on the bottom and the creme brulee layer was on top because part of the reason I enjoyed the dessert so much was the contrast of textures and temperatures: the crunchy yet warm caramelized top of the creme brulee juxtaposed against the chilly creaminess of the mousse and the vanilla custard.  When I once described this dessert to someone, they thought I must've remembered the order of the layers wrong, that the creme brulee custard was on the bottom and the chocolate mousse was on top.  Because how could you get the chilled mousse on the bottom when you had to bake the creme brulee custard on top?  The dessert was served in individual-sized ramekins and they were clearly made together.  But I absolutely knew the creme brulee was the top layer because it wasn't the mousse that was caramelized on top but the creme brulee.

The answer was obvious when I saw the recipe from Elegantly Easy Creme Brulee.  Traditional creme brulee is baked in ramekins, chilled then sugar is caramelized on top via broiler or handheld torch.  But this recipe calls for cooking the custard over a stovetop then chilling it once it was cooked, spreading it in whatever dessert dish you wanted it served in, then caramelizing the top.  Ha, problem solved.  I took the chocolate mousse recipe from Essence of Chocolate for what is essentially the same dessert I had in mind but I used the Elegantly Easy Creme Brulee recipe for the creme brulee so I could switch the order of the layers.

This endeavor started out easily enough.  The mousse was very easy to make.  Use the good chocolate (I used Valrhona).  I only let the chocolate-butter mixture cool for about 5 minutes before adding it to the yolks and it was fine.  Just keep whisking as you combine the two mixtures so they'll blend together smoothly.  Once I had the mousse, I spread it in 4 traditional creme brulee ramekins which are shallow and wide so you maximize the surface area of the bruleed top.  I covered each ramekin in plastic wrap and put them in the refrigerator to chill while I made the vanilla custard.  You want to give the mousse a head start in chilling since it'll be your base.

At first the vanilla custard was easy.  It's similar to making pastry cream or any other custard.  Heat the cream, let the vanilla bean (if using) steep in the hot cream to infuse the flavor into the cream.  Whisk the yolks, temper with the hot cream, put the cream mixture back to heat and cook gently until the mixture thickens.  Couldn't be simpler!  Except, I was trying to be true to the directions that called for cooking the mixture over the stove top for THIRTY minutes.  Boy, that was a mistake. And I wondered if it was a typo in the book. After less than 5 minutes, the mixture had thickened properly and I thought it should come off.  But I was still trying to follow the directions so I kept it on the heat.  Ugh.  Sure enough, the mixture "broke" and instead of a beautifully creamy mixture, I ended up with something that looked like really bad, grainy scrambled eggs.  I couldn't even salvage it by adding more cream to coax it back to life.  I had to scrap the whole thing and start over.  This time, I ignored the directions and went with my instincts.  The custard mixture thickened properly after less than 5 minutes so I took it off the heat, strained into a bowl, covered the custard directly with plastic wrap (to prevent a skin) and put it in the fridge to cool it from the initial heat.  Once the custard was no longer hot but wasn't chilled (I didn't time it exactly but I did a 35-minute workout while it was in the fridge so it was at least that long), I spread it over the chocolate mousse in the ramekins, covered them again, and put them to chill overnight.

Hmm, I would like to say the 2nd attempt worked.  But while it was better than the first attempt, it still wasn't quite right.  I think I undercooked it but then the texture was still slightly grainy which means it had gotten too hot or overcooked and was on its way to becoming scrambled eggs again if I hadn't taken it off the heat.  And when I bruleed the top after chilling for 24 hours, the custard nearly melted.  It definitely wasn't the smooth, creamy-firm texture of a good creme brulee.  More like a soft pudding.  I've made creme brulee successfully using the oven/water bath method but I don't think the stovetop method was a success.  I wonder if I just cooked it too fast or over too high a heat and 30 minutes MIGHT have been okay if my stove had been on the lowest possible setting.  But I didn't have it in me to make a third attempt, plus I'd run out of eggs and heavy cream by then so I gave up.  The only consolation was the mousse was good.  So if you want to try this recipe, you might find another creme brulee recipe or else bake the traditional way and pour over the mousse layer before it sets.  It might look a little jacked but it'll probably have better texture! 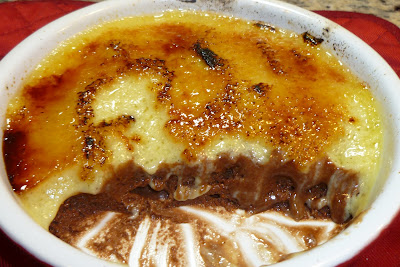 1. For the mousse: melt the chocolate and butter in the top of a double boiler set over gently simmering water, stirring occasionally until smooth. Remove from the heat and let sit in a warm spot until tepid or barely warm. (If the chocolate is too hot when added to the yolks, the yolks could curdle; if chocolate is too cool, flakes of chocolate may form in the yolks.)
2. The mousse is best made with a whisk or with a hand mixer; a stand mixer may not be able to whisk such a small quantity. In a medium bowl, whisk the egg yolks with 1 tablespoon of the sugar until a slowly dissolving ribbon forms when the whisk is lifted. Fold in the tepid chocolate. In a medium bowl, using a clean dry whisk or beaters, beat the egg whites with the cream of tartar until soft peaks form. Add the remaining 1 tablespoon sugar and continue beating until barely stiff peaks form. Gently fold half of the whites into the chocolate mixture, then fold in the remaining whites.
3. Spoon the chocolate mousse into lightly buttered ramekins, smoothing the top with a small offset spatula. Wipe the rim of the dish with a damp towel to remove any chocolate. Cover with plastic wrap and refrigerate for at least 6 hours, or preferably, overnight.
4. Make the creme brulee following the directions below.
5. When ready to serve, spoon the chilled custard over the chilled layer of chocolate mousse in the individual ramekins and smooth the tops into an even layer. Sprinkle about 2 teaspoons of sugar over each custard and caramelize.6. To caramelize the brulee: sprinkle the sugar in an even layer over the top of the mousse. If using a torch, work from one end of the dish to the other. Adjust the level of the torch as necessary to regulate the heat, moving the flame over the surface to caramelize the sugar. If using a broiler, place a rack on the highest level and preheat the broiler. Broil until the sugar is melted and caramelized, about 2 minutes. Watch carefully, and move or turn the dish as necessary for even caramelization.  Let caramelized sugar set for 1 minute then serve immediately.

1. In a large bowl, whisk together egg yolks and sugar until the sugar has dissolved and the mixture is thick and pale yellow. Set aside. Using a double boiler, bring the cream to a gentle simmer; do not boil. If using a vanilla bean, split in half, lengthwise, scrape the seeds from the inside with the dull edge of a knife and place seeds in cream.  Turn off stove, place vanilla bean skin in the hot cream and let steep for a minimum of 15 minutes.  Remove the cream from heat, and slowly pour into egg mixture. (If using vanilla extract, add here.)
2. Pour mixture into top of double boiler; the water should be simmering, not boiling. Cook, stirring frequently, until the custard is thick enough to coat the back of a wooden spoon, about 30 minutes (try cooking over very, very low heat). Remove from heat and strain into a large, clean bowl. The custard will thicken as it cools. Chill completely, at least 6 hours.