Buttermilk Cake - made June 24, 2011 from The Simple Art of Perfect Baking 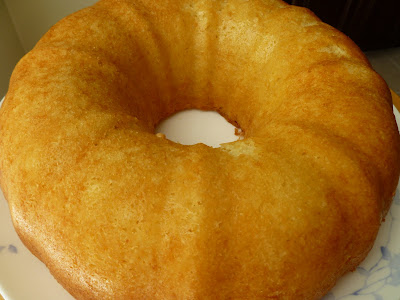 I was in a hurry to use up buttermilk again before it expires.  Actually it was going to expire while I was in Barcelona so I had to bake with it before I left.  After I had the taste test slice, I wrapped up the rest of the cake and put it in the freezer to give away later.  The recipe says to bake this as two 8-inch round cakes but I just made it in a Bundt pan.  Easier to wrap up and give away in slices.  I actually went almost a full week without trying out a new recipe - imagine.  (I don't count the baking I did of cookie dough I had in the freezer to give away to friends since I'd already made those and tried them out.)  So I didn't plan very well with recipes to use this particular quart of buttermilk before it expires.  I hate wasting ingredients so I did a quick flip through of the baking books I had left in my baking challenge to come up with this simple butter cake.

It has a lighter texture than a pound cake or a typical Bundt cake since this wasn't meant to actually be a Bundt cake; I just made it one.  Regardless, it worked out pretty well.  Don't overbake it as part of the appeal is the moist cakey texture.  I liked the simplicity of this cake - the buttery flavor carries it and it's also another candidate to take along to those summer picnics but it's a bit more delicate than say, the Chocolate Swirl Cake, and falls apart a little more easily so don't cut it until the last minute before serving.  Actually, you should never cut cake until right before you serve it or else wrap each slice immediately in plastic wrap.  If you don't, the cut ends will dry out more easily.

If you follow the original recipe to bake it into two 8-inch round cake pans, you can frost it but I liked it unfrosted because you can taste the goodness of the butter without any interference.  Because it's relatively plain, you can also dress it with summer berries and a scoop of vanilla ice cream if you're planning to serve to guests but choose flavors that complements it rather than competes with it. 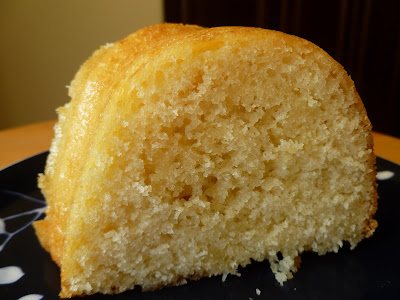