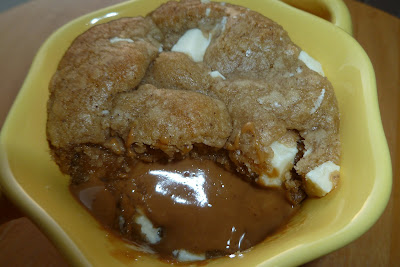 Remember the Nutella-Stuffed Chocolate Chip Lava Cookies?  I enjoyed those so much I had to come up with an excuse to make them again.  Or at least another version of it.  When a friend came over for our Fantasy Football draft last week, I had the perfect excuse.  But since I'd rather experiment than make the same thing over again, this time, instead of nutella, I used biscoff spread for the lava part.  I also swapped out the milk chocolate chunks for white chocolate chunks, using the only block of white chocolate I had bought in Europe for just such an occasion.

Let me set modesty aside for a sec.  Because really, who are we kidding?  This thing rocks.  I mean,  serious goodness.  As in, yeah, I'll go run a half marathon so I can eat this kind of stuff. Or, er, maybe a 5K.  Don't make me choose between this version or the nutella version though.  They were both good.

To make this version, start with the cookie recipe in the link for the Nutella-Stuffed chocolate chip lava cookies above, substitute white chocolate chunks or chips for the milk chocolate and use biscoff spread instead of nutella.  Trader Joe's Speculoos Cookie Butter Spread is a good alternative if you don't have biscoff spread.  For lava cookies, I'd recommend baking this in ramekins - line the bottom third of the ramekin with the cookie dough, drop a spoonful of biscoff spread in the middle, and cover completely with more cookie dough, filling the ramekin up to 3/4 full.  Chill in the refrigerator for at least 30 minutes (if you can last that long) then bake at 350 degrees until golden brown on top, about 10-12 minutes.